I promise that not all of my posts will be about food.

The past couple of days I've been off my feed a little, but today I decided to get back on the horse. My stomach troubles may be the result of some dodgy sparrows I had earlier this week with Kenny, my Vietnamese Best Friend Forever (VBFF) - photo follows, sadly taken with an iPhone and therefore not very good at all: 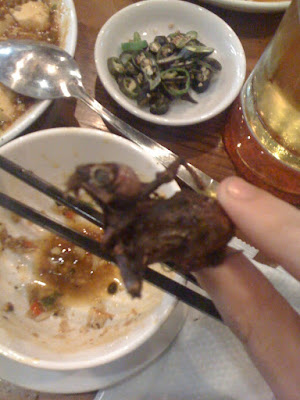 These come in a big, er, flock on a plate. I didn't know they were sparrows. Dip them in salt and lime juice and they're gone in two bites. Two tragic, shameful, delicious bites. I am having trouble reconciling my new-found love of sparrow-eating. I know this will draw criticism from most of you, dear readers, but please bear in mind that no living creature is spared in Vietnam, and it is not polite to refuse your host's offer of tiny creatures. 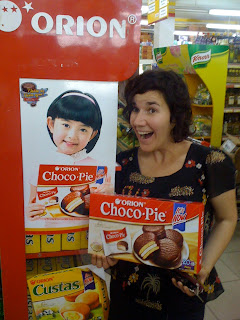 Vietnam's answer to the Wagon Wheel is much fatter, and not remotely crisp. The chocolate is a veneer of myth. The marshmallow some sort of industrial padding. We are growing to like them, possibly because our snack standards are falling so low. That, and we see Choco-Pies advertised everywhere. It may well be Vietnam's National Snack.

Lunch, though, and I was hankering for some real food. I had read on The Internet of a place just near us that does a nice line in tiny fried eels (sometimes whimsically translated as elfs on Vietnamese menus): 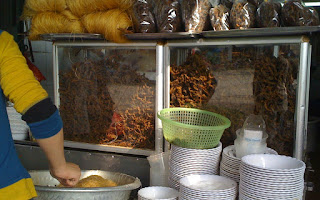 That's two cabinets filled with tiny deep-fried elfs. I ordered mine with a fry-up of glass vermicelli and egg, topped with fresh cucumber, herbs and crispy-fried shallots: 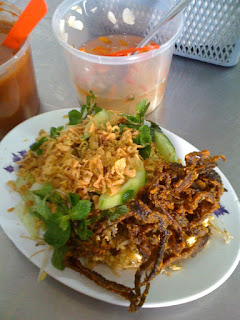 A squeeze of fresh lime made me fall in love with this dish. Why, why are the tiny animals the tastiest?

After a swift lunch I retired to a nearby cafe for iced coffee with condensed milk - I drink that now I'm a local, you see - followed by a salted apricot juice. The latter tasted exactly as I ought to have expected. My own fault, really.

For dinner I had resolved to follow up a tip that Tim in London had sent me: a New York Times article talking about banh my kebabs (http://travel.nytimes.com/2009/11/08/travel/08bites.html?ref=dining). I was sceptical about such things. 'No, Timothy!' I said, 'I will steer clear, thank you. For I have seen where they park the kebab booth during the day...':

This lonely little fellow is perched in a car park/garbage dump/building site until dusk, when someone fills his upright rotisserie with fatty pork and his drawers with vegetables. What I didn't notice until much later is that he is also branded with the very cafe name mentioned in the NYTimes article, so he would also include pickled red cabbage in the mix. What REALLY sold me, though, was another cart I saw in a back lane near the cathedral: 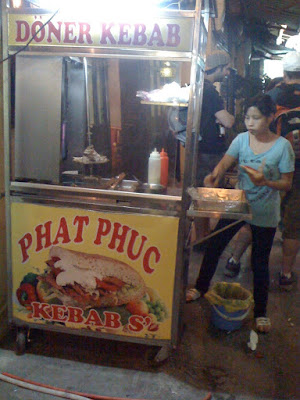 Sure, I was drawn by the name. I am not a proud man.

Tabitha's fellow AYADs Jasmine and Nathaniel joined me for a kebab-off. First up: Phat Phuc.

Being parked in front of a backpacker hostel should've given me more of a clue. We got a semi-pocket of soft bread, some limp carrot/pickle mix, sliced tomato, pork, and a chilli and a white sauce, for 15,000 dong (Google tells me that's about 88c). The resulting sandwich was tasty, but underwhelmingly so: 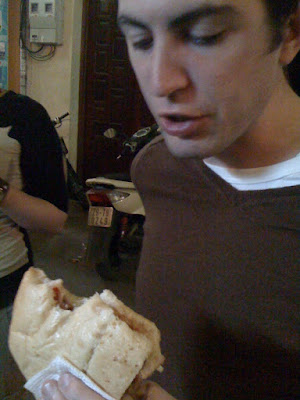 So we struck out for the Cafe Goethe booth, by now moved to the middle of the road: 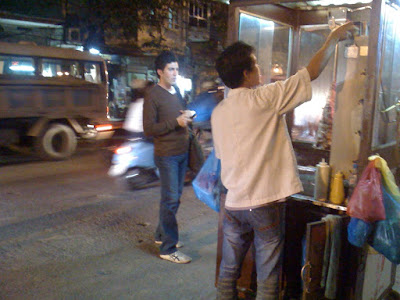 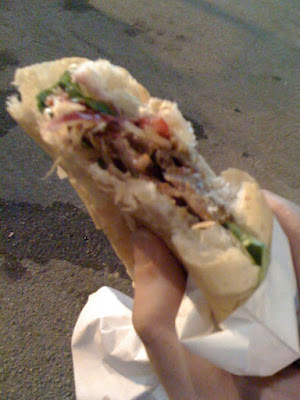 The Cafe Goethe banh my kebab has convinced me to try all the kebabs Hanoi has to offer, but in the meantime I weep with gratitude that this is 200m from our door.

Afterwards a quick skip up the road for an ice cream, sold individually on sticks out of a big chest freezer with a see-through lid - which, come to think of it, is how ice creams are sold in Australia, also. More or less. 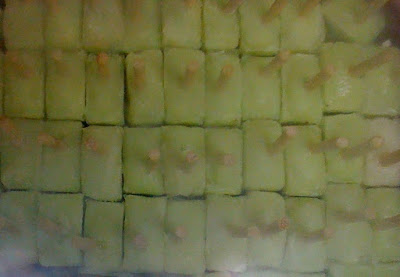 Tomorrow we're off on a week-end mini-break with Tamara, Shannon and Jasmine, to visit John Paul, currently stationed beachside in Qui Nhon, an hour or so south of here by Fokker 70. John Paul is the only AYAD posted in town, so far as we know, and I suspect he has been charming the locals. He's done us the great honour of arranging a party for Saturday night, which he tells us will be Vietnamese-style. I hope that doesn't mean sparrows.

This is what our house looks like from the street: 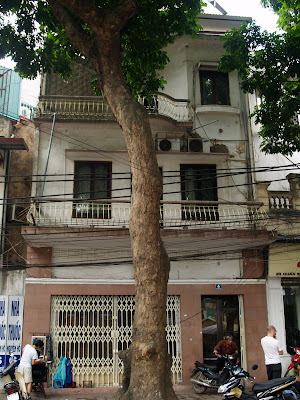 It attracts quite a cast of local characters. They can change every day, but today we have, over on the left, our friend the barber, who can give you a haircut or beard trim right there on the street: 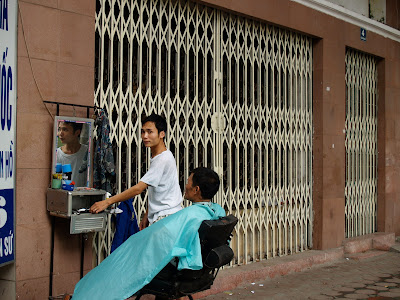 Nathan has already tried him out. And over on the right are the Vietnamese chess guys: 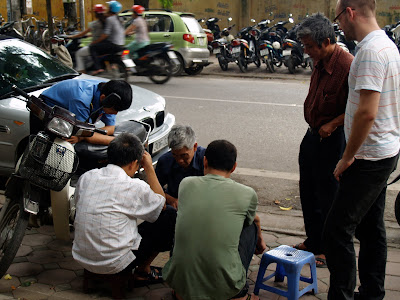 It's only a matter of time (and learning the rules) before Nathan gets in on this action also: 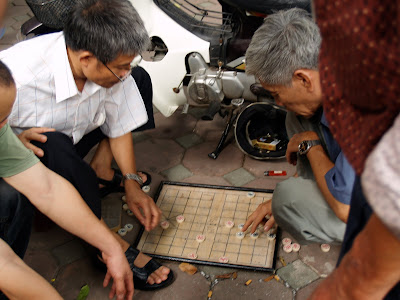 Also watching the chess guys is the motorbike parking attendant for the shop on the corner: 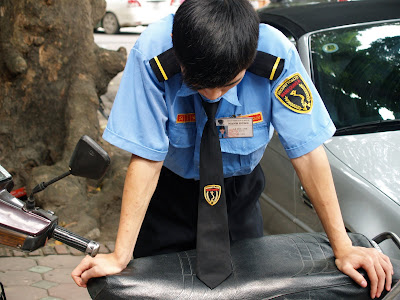 He looks about ten years old, and seemingly works 12-hour day. Across the road is more motorbike parking for the hospital: 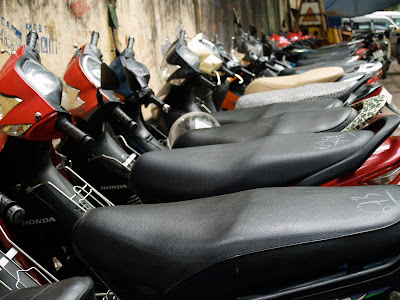 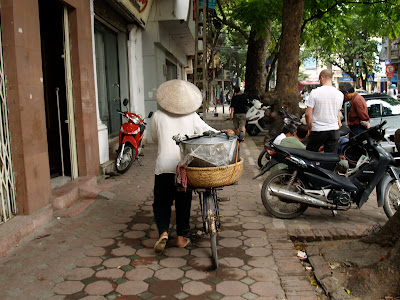 And up above, the neighbourhood birds out and socialising on this Sunday afternoon. 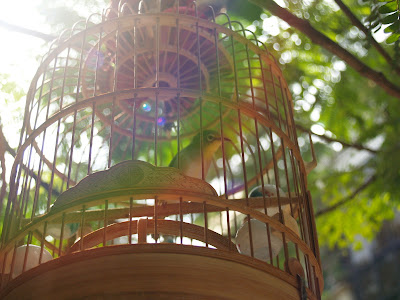