I don't want to alarm any of you, Dear Readers, but A CRIME WAVE IS SWEEPING ACROSS HANOI.

This first came to my attention whilst using my friendly local ATM at the travel agent around the corner: 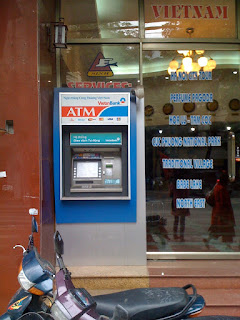 The ATM and the travel agent are unrelated, but the staff here knows me as That Guy Who Left His Card In The Machine A While Back Who Bothered Us About It And Then Had To Go To The Bank's Head Office To Get It Back. (It's snappier in Vietnamese.) So every time I draw money out I get a nod and a wave and a smile. Nice.

When I got money out recently, the ATM made a cute little beeping noise when I retrieved my card (I've been careful about that, since). Beep! Such a cheerful, random, misplaced, data-stealing beep it was. Beep!

Instantly falling into crimefighting mode, I investigated the machine. Perhaps the reek of superglue should have tipped me off earlier, but there was a sneaky panel over the card slot! And I'd just put my card through it!! And it wasn't even attached very well - I snapped it off with my crimefighting hands!!! 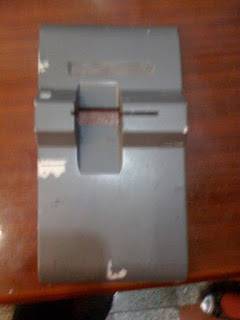 Cleverly designed to look like part of the machine, complete with flashing green light. But turn it over... 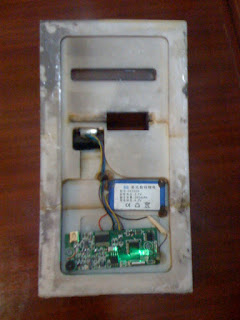 Computer components! A magnetic strip reader! Gadzooks, I have been swindled!!

By this time I had the attention of the travel agency staff. The parking attendant fellow was baffled - he'd never seen such a thing. He tried to stick the panel back on the machine. 'No no!' I said, 'it's bad!' Puzzled, he alerted his superiors inside. Nods and smiles, ah, it's That Guy Who Left His Card In The Machine Etc. What's he up to now? More card troubles, no doubt.

'Look! I just tore this off the ATM!' I showed them the sneaky panel, which they tried to stick back on the machine. 'No no! It's bad!!'

I tried explaining the intricacies of credit card skimming; they were mystified. Each member of staff fetched another, and each tried to put the panel back on. Finally, with the aid of their computer inside, I found a website in Vietnamese reporting on ATM skimming.

'Ohhhhhhhh!' they said, eyes wide with this Forbidden Knowledge. 'But how did you know? You are very clever!'

I refrained from pointing out that I had already passed my card through the skimming device and basked, instead, in their admiration.

Reading on, the internet told me to keep an eye out for some sort of camera, also. My crimefighting duties were not over yet!

Back out at the machine I found a power point panel positioned strategically above the keypad. Not being able to recall when last I've needed to plug something into an ATM, I tore this off with my crimefighting hands also, then prised it open.

A camera! A miniature camera recording every PIN-pushing detail! Outrageous!! And a little memory card! I stared into the sneaky little pinhole they'd made and pulled my most stern, scolding expression. Rotten crooks. Your jig is up.

The assembled staff was very excited about all of this. They phoned the bank who said they'd send someone, and I headed home to cancel my card, just in case. I thought about taking these instruments of crime up to the local police station, but the thought of explaining it all over again... besides, the travel agent folks know who I am. They can direct the police to my house later, when they come to deputize me as an Agent-at-Large. Hanoi's criminal masterminds are no match for me.

Of course, this single, isolated event hardly makes for a crime wave. Bicycle theft, on the other hand...!

A few days later, my beautiful black Asama City single-speed (with basket) was parked on our very doorstep - I figured I'd be fine to leave it there for just a few minutes whilst I ducked upstairs. Surely it would be safe next to fourteen chess players, right? Fourteen disreputable old tattooed chess players? In the middle of the afternoon?

Sadly, I have no picture of my bicycle to show you, for it was stolen within twenty minutes.

I prowled the footpath angrily. Tea Shop Lady asked me what was wrong: 'Toi xe dap,' I said, then gestured emptily. My bicycle, gone. She was shocked and horrified. Her husband likewise. The parking attendant from the jewellery shop on the corner stifled a nervous giggle. The barber (Tea Shop Lady's son, as it turns out) was philosophical. Tea Shop Lady pressed the chess-players for answers - no-one saw anything, no-one had anything to say. Fourteen potential witnesses remained hunched, intently, over their game.

Feverishly, my brilliant crimefighting mind calculated the possibilities. Obviously this was no mere crime of opportunity - no-one would swipe an unlocked bicycle from a doorstep in a busy neighbourhood. Who here harbours a grudge against me? And who could intimidate fourteen rough-looking chess-playing ne'er-do-wells into total, stonewalling silence?

It makes perfect sense! I bust their operation to smithereens, but somehow they retrieve the last images from their hidden camera: my crimefighting face, pouring shame and scorn upon their two-bit pea-and-thimble tactics! So the word goes out to look out for this titan of neighbourhood policing, and, when he is at his most vulnerable, they swoop! And some toothless thug gets to give his daughter a new bicycle in time for Tet.

By Sunday I've replaced my bike with the Asama Warrior, in blazing white and gold:


I now keep this locked safely inside. Not because I'm afraid, you understand, but because I don't want to give them another chance.

And then a few days later, something interesting happens.

We're on our way home from dinner and we bump into Tea Shop Man on the footpath outside our house. He and I have had a bit of a solidarity thing going on since the bicycle theft; nods of sympathy and understanding. He's even helped me sweep my part of the footpath, acknowledging that most of the rubbish is from the tea shop patrons. I have the impression he's not so thrilled to have had this happen on his turf, in front of his paying customers.

Tonight, he's had a bit to drink.

Oh really! I mime back.

Yeah, don't trust the whole rotten bunch of them. Fourteen! Fourteen of them, and no-one saw nothin'! (I told you, he's very good at the miming. He even did the double negative.)

I can scarcely believe it myself, I mime back.

Darn tootin', he mimes. Rotten to the core, the lot of them. You should sweep them right off your front steps. Sweep them off your steps and into the gutter, where they belong. And he mimes sweeping. And mimes spitting in disgust. And totters off into the night.

When a neighbourhood tea shop turns against its own customers like this, it gives you pause. Vietnamese social politics is far more complicated than I thought.
Posted by Nathan at 09:44 7 comments:

One week before Tet

Christmas-time in Hanoi was ostensibly festive. There were Christmas decorations and Christmas trees everywhere, and I heard more carols than I have ever heard before, or ever want to hear again.

A whole street was dedicated to Christmas paraphernalia: 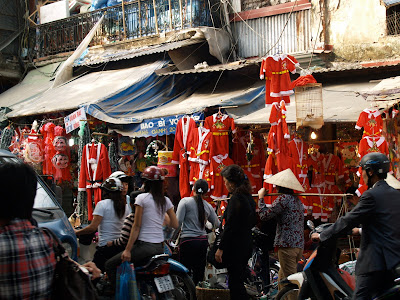 And you could actually see the Real Santa's Workshop in action: 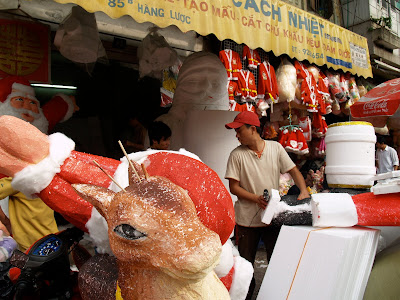 But despite this, and the cursory festive activities undertaken by me and my friends, it felt decidedly un-Christmasy. What was missing was the exponentially frenetic preparations and the anticipation of time off work which so define the festive season, and which can't be faked, no matter how many polystyrene Santas you make.

In one week's time it is Tet, the Vietnamese New Year, and the Christmas decorations street now looks like this: 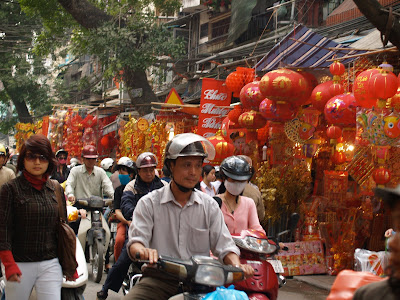 This time around, the building excitement and concomitant preparatory madness is completely pervasive and inescapably infectious.

Hanoi is always hectic, yet it has somehow managed to step it up a notch to the category of abuzz. The decorations street is amazing: 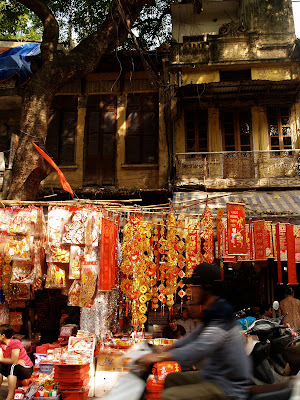 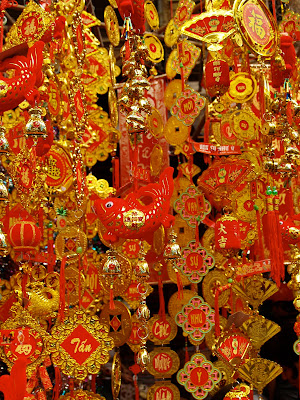 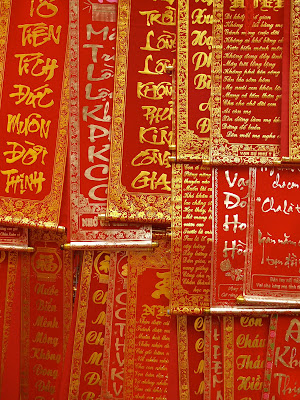 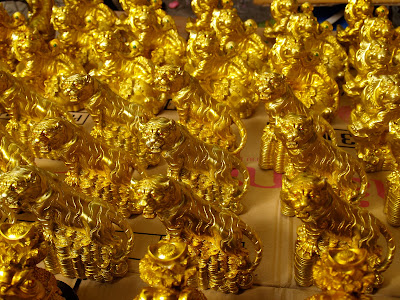 It is also an out-of-control traffic catastrophe. The wise shopper opts for the travelling decorations salesmen instead: 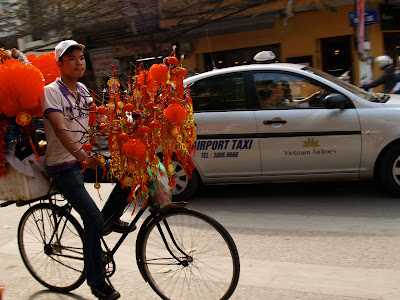 The decorations are for hanging in your house and on the Tet version of the Christmas tree, the cumquat tree: 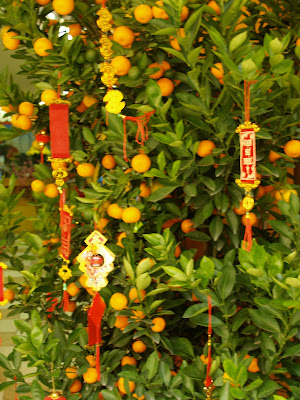 Which, like almost everything in Vietnam, comes on the back of a motorbike: 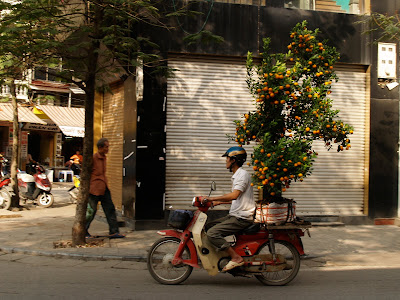 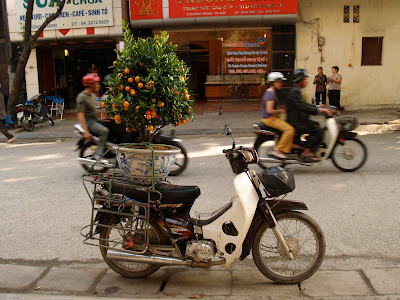 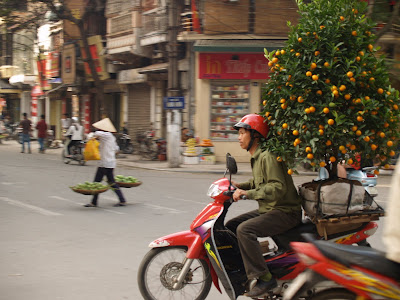 Alternatively, you can use peach blossom branches, which, like everything else in Vietnam, are sold by women in conical hats: 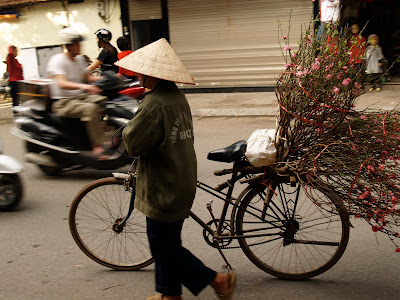 This is what we've opted for: 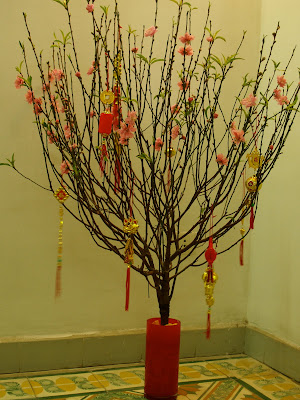 As with Christmas, you also send hampers for Tet: 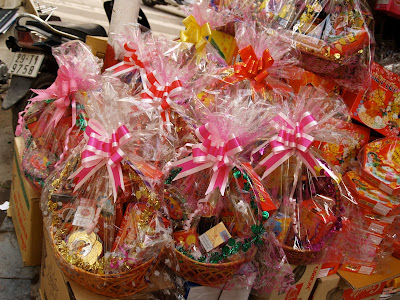 The only difference is that they contain packs of cigarettes, and, like the one we received at work, alcohol with names like Chiwas, made from "whiskey materials".

There are so many meaningful and significant things to do and buy around Tet, that an amateur like myself can find herself completely confounded. One day, alarmingly, everyone will be out on the street burning small paper horses: 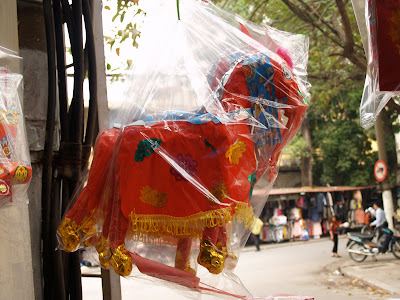 Then the next day they will be burning what appear to be paper robot rabbits: 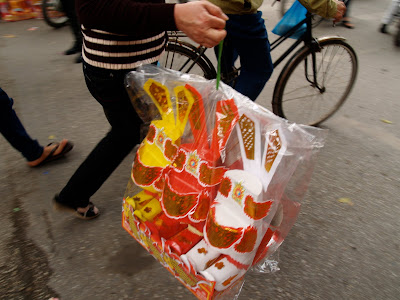 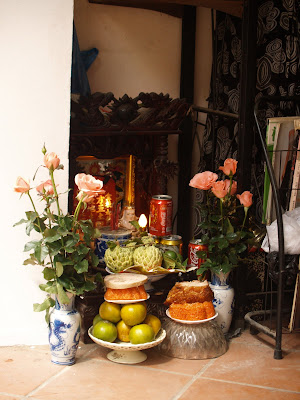 You can see some robot rabbits on this one, no doubt about to meet their fiery end: 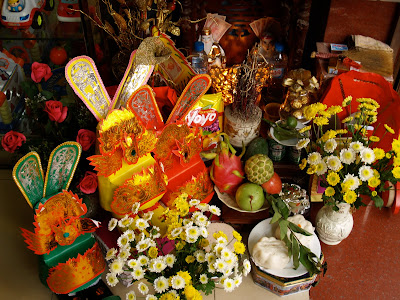 There are also so many special Tet foods, that I can't begin to cover them and their traditional meanings. Most of them involve pork, rice, pickling and/or banana leaves: 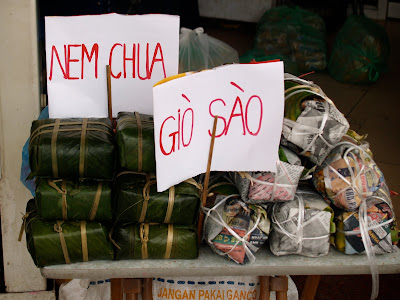 As with Christmas pudding, preparing these festive foods is extremely time and labour-intensive. One such dish is gac xoi, made with gac, which is, apparently, the spiny melon gourd: 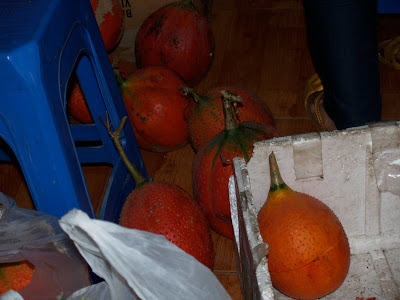 The flesh of which is just as freaky-looking as its outside: 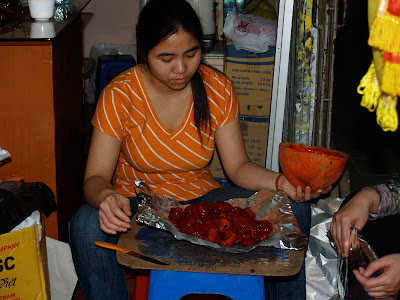 It is then mixed with glutinous rice: 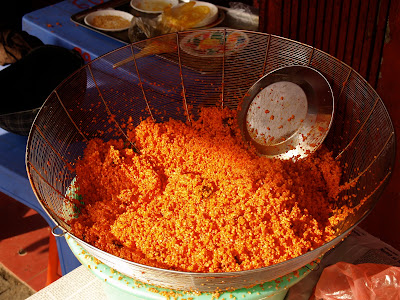 To become this pretty, not particularly tasty, sticky rice cake: 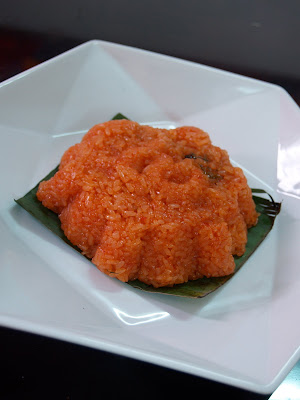 The hustle and bustle around the time of Tet is intensified by the need to have things in order for the New Year to ensure good luck. My work hurriedly moved into a new office location - which wasn't actually finished being constructed - before Tet for this reason. Debts must also be paid off, new clothes and furnishings must be purchased, and everything must be cleaned and freshened up. The streets of Hanoi have never looked better: 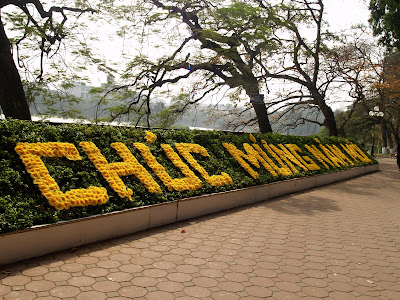 To ensure good luck for the whole city of Hanoi, the government even issued a decree saying that all buildings, including houses, must remove all street posters, stickers and stencilled advertising from their exterior walls before Tet, otherwise they would cut off the offending building's power supply (!!). So, there's a lot of this going on: 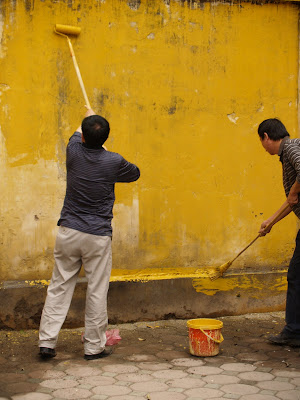 Nathan dutifully cleaned the outside of our house too (with our neighbourhood lingerers all pointing and observing, "Aah, Tet!"), but in an unexpected and yet again confounding turn of events, it has since been plastered with a government poster warning against the dangers of fireworks at Tet: 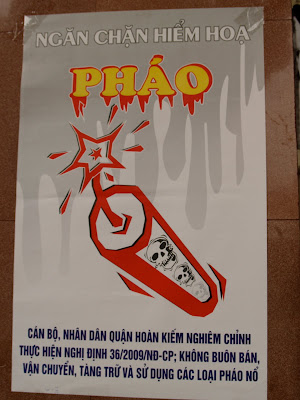 There is probably another decree to disconnect your water supply if you remove government posters warning against the dangers of fireworks. Those Communists will have their bases covered somehow.

Finally, you will be pleased to know that Tet has its own version of the ubiquitous Christmas carol. It is not a traditional Vietnamese song, but a little-known Abba song called "Happy New Year", which in the lyrics explicitly celebrates the coming of the year 1980. This does not prevent it being played in Hanoi everywhere and continuously, thirty Tets later.