Of the four animals traditionally held sacred in Vietnamese culture – the dragon, the phoenix, the unicorn and the turtle - there is only one that hasn’t been eaten into extinction.

The turtle, seemingly like all sacred things in Vietnam, represents longevity and good fortune. At Hanoi’s Temple of Literature, an army of turtles hold up stone tablets. Students rub their heads for good luck. 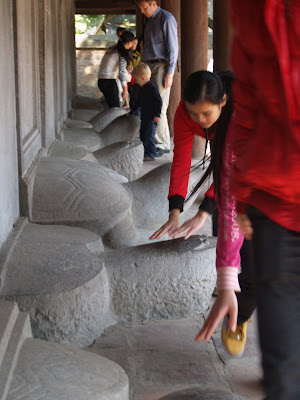 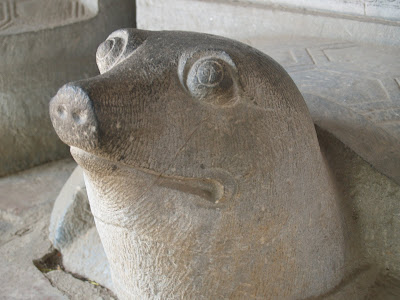 If you rubbed Benny’s head for good luck, he’d have probably pissed on your leg, just for good measure.

The most famous Vietnamese turtle is the giant, sword-munching, legendary turtle that gives Hanoi’s Hoan Kiem Lake its name (“Lake of the Returned Sword”). All you need to know about this legend is that the turtle, by stealing an Emperor’s magical, Chinese-slaying sword, aligned himself not only with the powers of heaven, but also with anti-Chinese sentiment. What a guy. What a turtle. 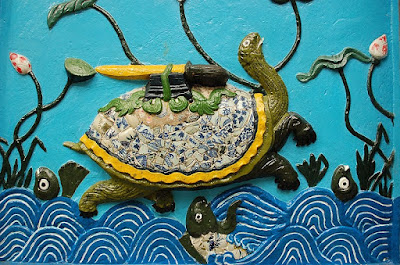 A few years ago, two similarly legendary, and probably racist, turtles were discovered living in the lake. The first was discovered when it was fished out of the lake by the Ha Noi Food Company (I guess times were tough after the unicorn, phoenix and dragon market dried up), and is now stuffed and on display in the pagoda on Hoan Kiem. 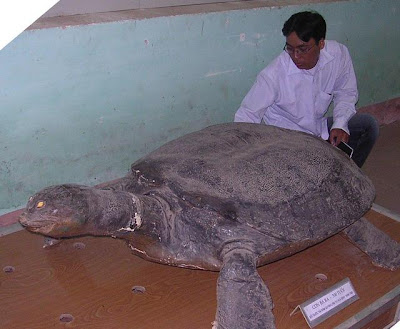 The second turtle is still in the lake. He’s legendary for being an extremely rare Yangtze (hush!) Giant Soft-Shell Turtle, and for somehow surviving in the luminescent pollution of Hoan Kiem. There are only three other known Yangtze Giant Soft-Shell Turtles in the world. He’s pretty damn ugly. He has soft cartilage where any self-respecting turtle would have a shell, and his nose is kind of penile. 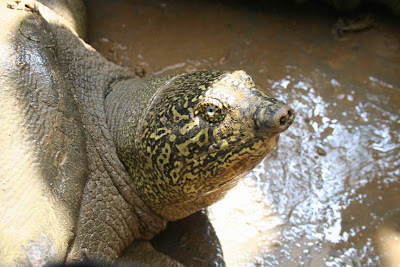 He generally keeps to himself. In fact, it’s very rare, and of course auspicious, to see him. But Nathan and I did actually see him! During Hanoi’s recent 1000-year birthday, we were cycling past the lake, and were alerted to his presence by a crowd of excited turtle-lovers, scrambling over the top of each other to get a better look. We did the same, and there he was, surfacing every now and again to a gasping crowd of admirers. It looked much like this video from 2006.

Not many Vietnamese, who have lived in Hanoi all their lives, have ever seen the turtle, so we were obviously extremely pleased with ourselves. And what luck to see him during the 1000-year celebrations!

But it’s a fine line between auspicious and SUSPICIOUS, dear readers. The turtle has an uncanny habit of popping his grotesque little face out of the lake during times of celebration. A friend of mine has even seen him twice – it just so happens both times were on separate Vietnamese New Years. It is reported in the media (aka the government-controlled media) that the coincidence of a turtle sighting and an event of national significance is particularly lucky. I’d say.

Nathan and I have the unsettling feeling that we were the unwitting participants in some kind of stage-managed display to boost turtle-related national pride. I don’t quite think it’s a robotic turtle, and I don’t actually know how you’d choreograph a turtle appearance, and of course, there are always more people around the lake during these times so maybe a sighting then is more likely... But it just seems to me that this turtle makes up for his lack of shell with an impeccable sense of occasion.

Post-script: Scientists are discussing breeding the Hoan Kiem turtle with one of his last remaining turtle friends, who is currently in a zoo. In China.
Posted by Tabitha at 11:05