The Year of the Cat

It is Tet again, and everything is much like last year. The streets are packed with people buying paper offerings, the Abba "Happy New Year" song is on permanent repeat, and the road is basically one big motorised cumquat tree orchard.
Unlike in China, where it's the Year of the Rabbit, in Vietnam 2011 is the Year of the Clearly Superior Cat. This is particularly exciting as it's the one example in the so-called "Chinese" zodiac where Vietnam distinguishes itself from its northern arch-enemy.
There are surprisingly few cats in Hanoi - especially given the number of chuộts - and the ones you do see are often tied to strings. This is because, predictably, cats are stolen to be eaten. There is a man who cycles around our neighbourhood with a cage full of mewling cats for sale on the back of his bike, and it's pretty much the most godawful thing you've seen, trumping any childhood caricature of evil dogcatchers.
Vietnamese cats are called "mèo", they say "meo meo", and they eat: 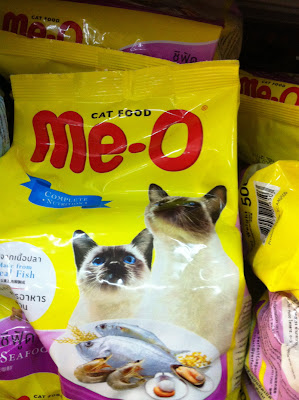 Aah, so awesome. If only learning the rest of the Vietnamese language were that easy.

Actually, most Vietnamese cats don't eat expensive Me-O imported from Thailand. Like all other pets here, they eat rice. Sometimes raw. There is a particularly telling story to illustrate this subject (from Witness to Extinction) of a captive Yangtze River dolphin being fed rice cakes, and unsurprisingly, not really taking to them. So what did they do? They fed it rice cakes... shaped like fish.
Lucky cats expand their rice diet by eating whatever else they happen to be fed. For example, this is the cat bowl at a nearby pho restaurant: 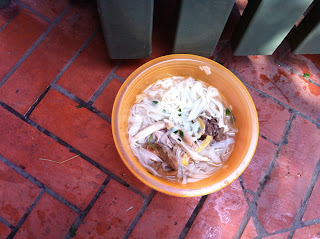 Show that photo to your cat next time he won't eat his blue-fin tuna Snappy Tom meal, and tell him the cats of Vietnam would be happy to swap.
But aside from eating rice and avoiding the hotpot, cats in Hanoi are pretty much like cats the world over. They snooze in inconvenient places: 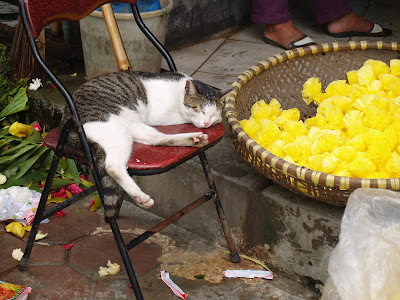 They give you superior looks: 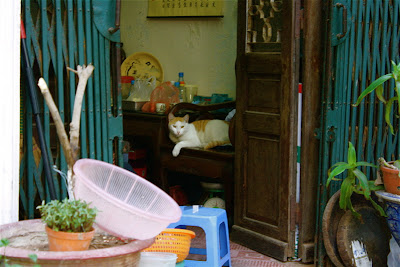 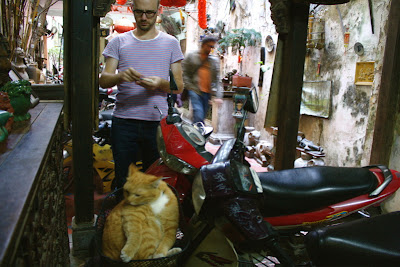 And do your laundry: 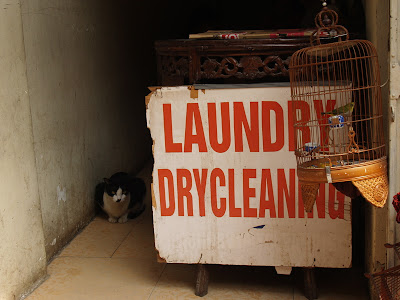 So happy lunar new year to you and your cats, from us and all the cats of Hanoi, and what better way to say it than with a cat licking its bum: 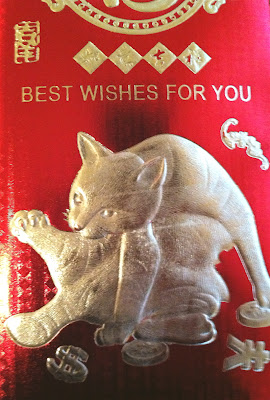