As I mentioned in my last post, Hanoians aren’t really big on non-utilitarian animals. This means that one thing we really miss here is pets, and it shows. Over winter, I began, rather pathetically, referring to our electric hot water bottle as “the cat”. Sure, it warmed your lap and snuggled against your toes in bed, but you also plugged it into a power socket. 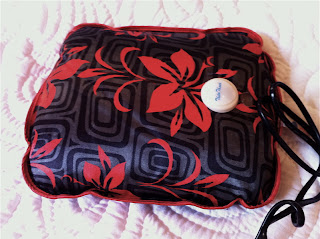 What next, a pet rock?
Nathan is arguably even worse than me. In our old house I woke one night to find him not in bed but in the kitchen in his pyjamas, sitting on the counter perfectly still and holding aloft a broom, his gaze absolutely fixed on the fridge. It was quite an eerie sight, but he “explained” his behaviour, by saying he was studying the habits and movements of the rat who’d taken up residence behind the fridge (the broom was protecting him from the rat, you see). Naturally, this didn’t result in him masterfully exterminating the rat, but instead growing to love it – and all its little habits and movements - dearly.
I was soon won over too. The rat would fish out lime seeds from our bin bag hanging from the door handle, and crack each one to get to the little kernel inside, then discard the husks by placing them in a perfectly straight line on the handle. Then one night he carefully chewed a tiny little hole into a spirulina capsule to create a small, powdery pile of dietary supplement for himself. We felt nothing less than pride, as, after all, he was our rat.*
After then developing attachments to various house geckos (named, invariably, Gordon), and then an enormous furry spider (Ernest), a new pet came into our life quite by accident.
When we visited Cuc Phuong National Park, Nathan - being an excellent and romantic boyfriend - came back from a hike with a present for me of a large and quite beautiful snail shell that he found on the path. I “awwed”, then popped it into my coat pocket for the rest of our stay. When we got home, I put it as a memento on my bedside table, alongside my book.
I know that you know where this is going, but let me just say that it came as quite a surprise to us when we discovered one week later that a good portion of the book cover (Jonathan Franzen’s “Freedom”, for the record) had been consumed and pooed out into little papery snail poos.
And so, we had a pet snail. 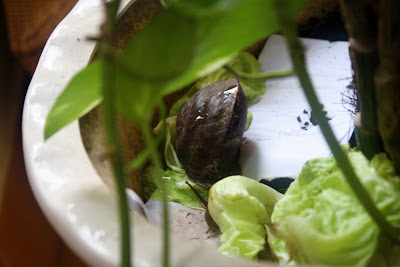 He lived in our pot-plant, paper was his favourite food, and we called him Ron as he didn’t do-do-ron-ron very much at all. He was also the source of the mortifying shame that we – wildlife lovers that we are – had taken a little creature away from his home. We were no better than our neighbours, with their prized finches, trapped from the wild to live out their days in a cage in Hanoi.
So we packed up Ron into a Tupperware container and sent him back to the forest with a friend heading to Cuc Phuong.
And maybe you can’t understand this until you’ve lived in a city where the dogs cower from cuddles, the cats are on menus instead of laps, and there’s not one single duck to feed in all of the lakes, but I really miss that snail.
*When Nathan read this just now, his response was “Oh, I miss him! And his crooked little tail!”. I rest my case.
Posted by Tabitha at 16:03