Back when I lived in Newtown, the most upsetting sight in my day-to-day life was the wind-up frog that was on display in a bucket outside the two-dollar shop, forever swimming but going nowhere. 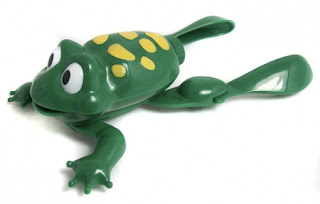 Nathan and I used to talk about stealing him, and setting him free in the canal.
There are frogs here too, in the market where I go almost every day. But they don't wind up, and they're not so lucky as to have a bucket. 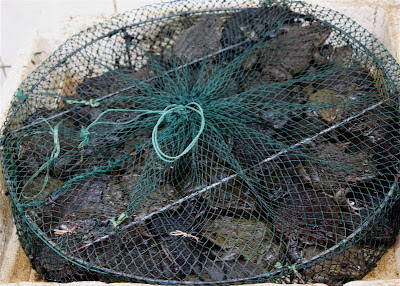 I guess at least they have company, right?
There's also dog meat (I'll spare you the photos), and buckets of unidentifiable offal. 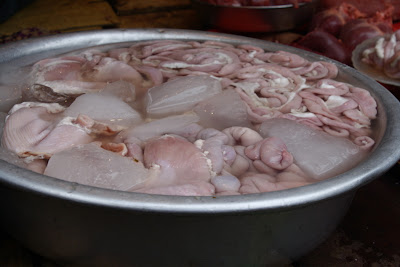 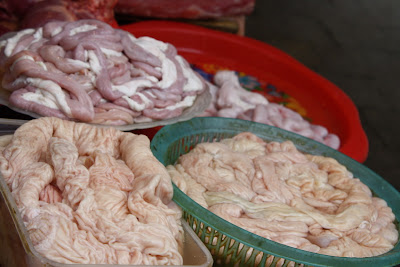 Mmm... offally.
And yet, the market is one of my favourite places to be. Sometimes I wonder what kind of mental contortions I must be putting myself through to get by here without giving in to my usually all-pervasive blubbering sentimental side.
But with my blinkers firmly on, the market is always a scene of wonder. Visitors doing cooking courses at the Hanoi Cooking Centre actually tour this market for an "authentic" Vietnamese shopping experience. Like kids playing shop, they are furnished with a laminated picture of their target produce - like baby corn or quail eggs - and 50,000 dong with which to acquire it. It makes me feel quite smug that they're paying good cash money to "experience" my daily life. I wonder if they'd like to "experience" any other bits, like being extorted by shoeshine boys, or cycling slalom amongst the rat roadkill, or discovering your boogers have turned black from pollution.
The market itself seems to be held together by lids from polystyrene boxes, tarpaulins, plastic bags and extension cords. It is always dark, even during the daytime. 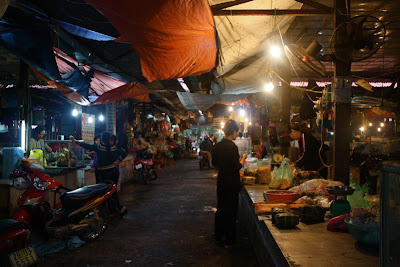 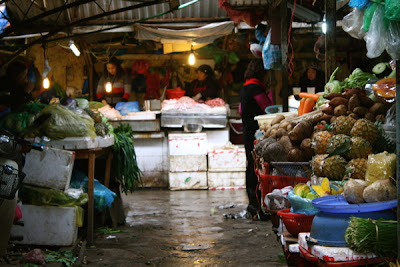 I have never been here when it's raining, and I don't think I'd want to. Even during the dryest spells, the ground is puddled with muck. I remember the first time that Nathan and I came here we wore thongs, which was a mistake we wouldn't make again. When we got home to our bathroom, we washed bits of intestine from under our toe-nails.
The market is divided into food groups: veggies, meat, seafood, small-goods, internal organs, and dried and packaged goods. Mysteriously, fruit barely makes an appearance: for that you have to go the ladies outside. 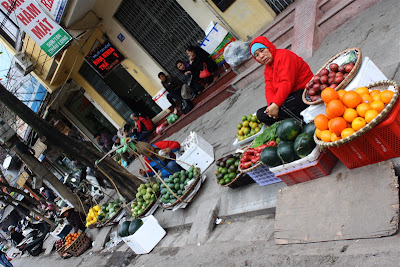 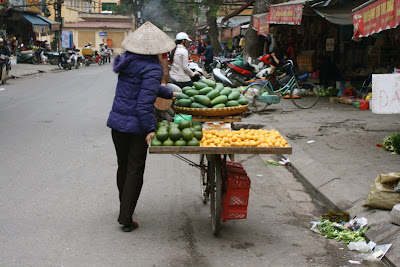 The packaged goods often don't come in the package you expect them to, so I have to conduct elaborate miming routines with the vendors to find out what they are. 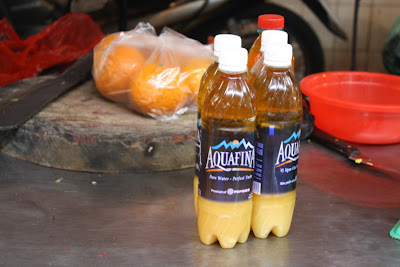 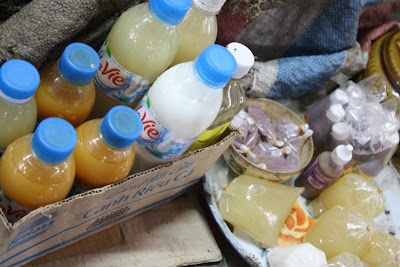 I'll point to an unlabeled plastic bottle and mime squeezing limes, adding fish sauce and the mystery liquid, and dipping in an imaginary spring roll. They'll shake their head, and mime washing the floor. Ah, not rice vinegar but bleach. Good to know.
The butcher ladies sit cross-legged on their counter-tops like meditators in a sea of meat, their cleavers swinging inches from their toes. This posture must be for ergonomic reasons - the butcher's Swiss ball. It seems like an odd choice, but I can't imagine a situation in which I'd get to test it out for myself, not least because if I sat on our counter at home I'd hit my head on the cupboards. 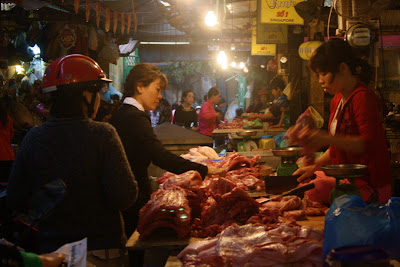 Being vegetarian, I usually skip the meat aisle and just head straight for my regular veggie supplier, Chi Xuan. 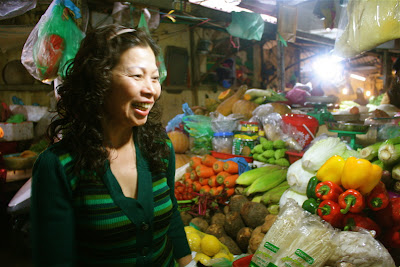 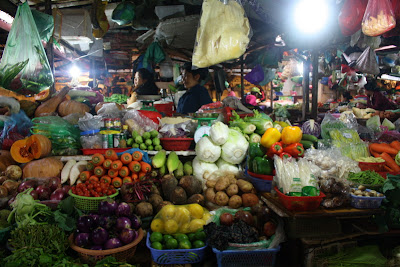 All the expats I know in our neighbourhood go to her. She's cornered this market by giving her customers hugs, consistent prices, and free Italian basil. She also lets you choose the vegetables you want, and in your own good time, a characteristic lacking in most of the other sellers, who, upon seeing a foreigner approach, thrust a cauliflower at you and say "This one!", and then a cucumber - "This one!" - and then a pumpkin - "This one!" - and so on until you flee, bamboozled. Sometimes Chi Xuan does encourage me to buy mysterious vegetables that I have to later Google to identify, but if she didn't I would never have made those delicious taro spring rolls, or that stir-fry made from some kind of flower which she assured me was edible: 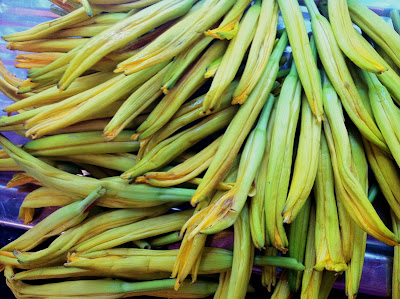 Over Tet, Chi Xuan acquired a calculator, which she now brandishes with beaming pride. I'm sure I'm charged a lot more than her Vietnamese customers, but I don't mind having contributed to the purchase of that calculator.
Chi Xuan sometimes also gives me a hand by shelling my peas or trimming my shallots, but there's also a fast-food section of the market where you can buy pre-cooked noodles, peeled potatoes, toasted peanuts, shredded banana flower, and pickled greens and bamboo shoots. 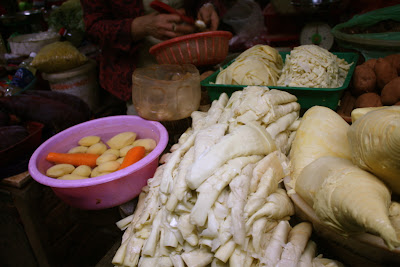 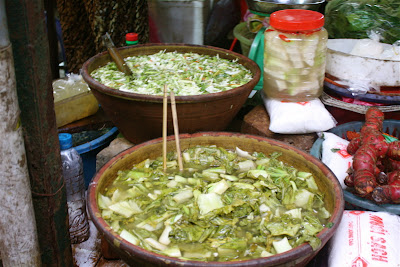 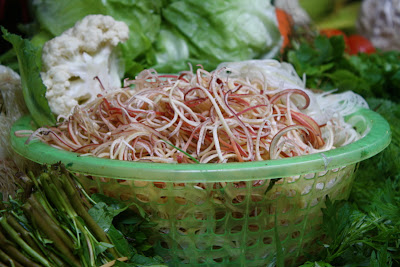 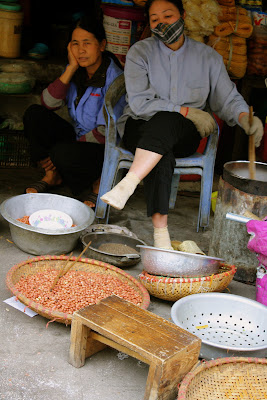 Of course, like everything else in Vietnam, you can get this fast-food served to you drive-thru style. 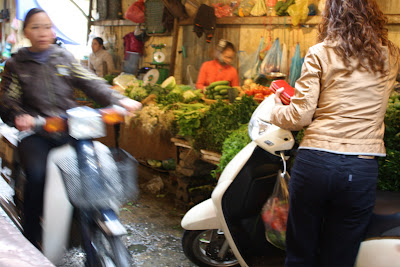 The market item which causes me most wonder is the tofu. It arrives on the back of a motorbike, in individual metal moulds. It's then upended into watery buckets and sold for 1,000 dong a block. 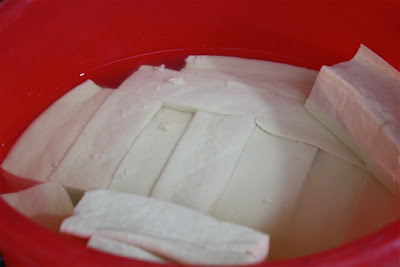 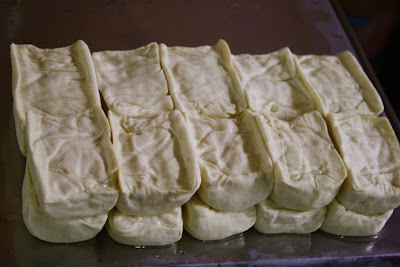 That's five cents, for what we'd call artisanal produce. Most food here is cheap, but if my job were milking soy beans, I'd want a lot more than five cents.
While in the west, farmers' markets are the hottest ticket in town, the trend in Hanoi is still to knock down markets like this and replace them with malls and supermarkets. I don't blame Hanoians for wanting to do their groceries without wading through intestinal juices, but it's a damn shame: they don't give you hugs in the supermarket.
Posted by Tabitha at 09:04