Hanoi says it with flowers

One of my favourite things about Hanoi is the flowers. Not the temporary potted displays that appear on the median strips when there’s a Communist Party shindig on - although I like those too - but the cut flowers, sold from bicycles: 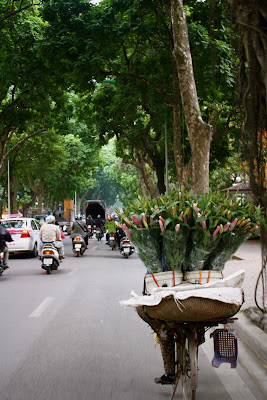 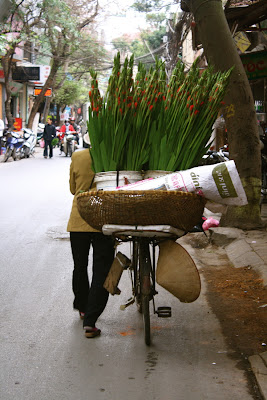 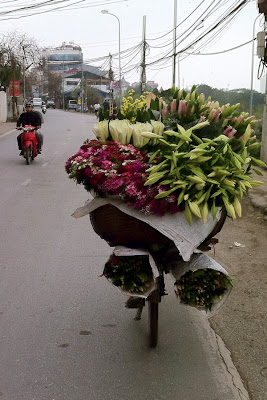 Our weekly household flower budget is about 80,000 dong (four dollars), for which we can get enough bunches to fill the house. Shopping for flowers is about the only time when I’ll really haggle, because the flower-sellers are theatrical and good-natured about it, and I’m usually pretty confident about the fair market price. I’ll hold my ground while they stamp their feet, turn their back in mock disgust, shake the petals in my face, saying “Vietnamese price! Vietnamese price!” until they inevitably relent, hand over the goods, and praise my excellent Vietnamese (well, yes, I'm pretty good at the numbers...). 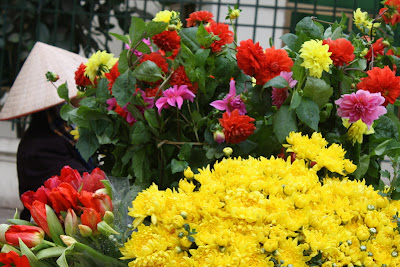 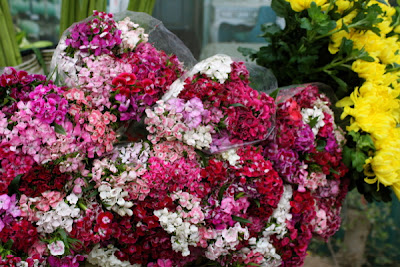 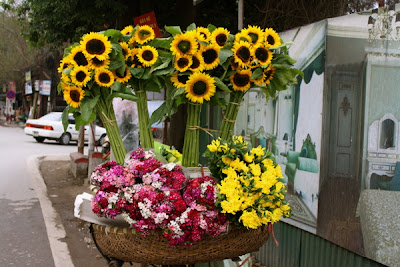 They strap the bunches to your bicycle for you using newspaper and twisted strips of bamboo, which works better than any bag-tie, and looks very rustic (a trendy, inner-city florist elsewhere in the world would call it “shabby chic” and charge you extra): 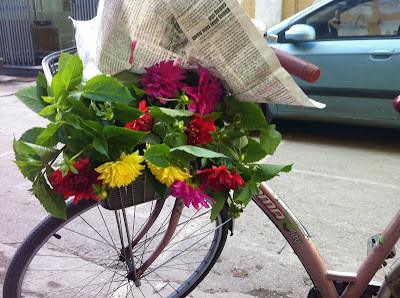 Let me tell you, when you're cycling about town on your pink Asama City with a huge bunch of dahlias in your basket, it's pretty much the best thing ever. I recommend it to lift any mood.
Because of their low price and availability on practically every street corner, Hanoians buy flowers for their home as routinely as shopping for fruit and vegetables. They also have to frequently replenish the fresh flowers on altars in their house, at work or at the pagoda: 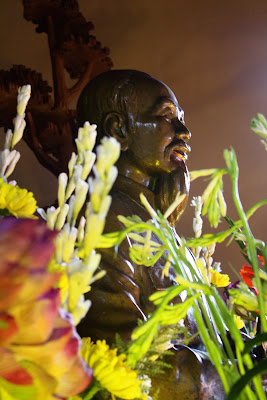 As a result, Hanoians are throwing away flowers as often as they’re buying them, and they can afford to be fickle about it. Come evening garbage collection, the gutters are strewn with slightly wilted posies, most of which I’d still leave in the vase for another week. The trashed flowers are, in a way, as much a part of the city as the fresh ones: 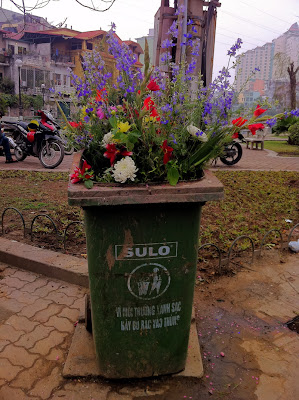 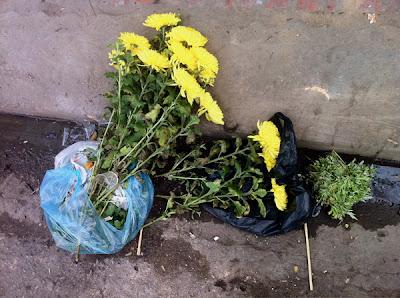 It gets particularly crazy after Tet, when the peach blossom branches - kind of a Tet Christmas tree -  start littering the streets approximately five minutes after the festive season is over: 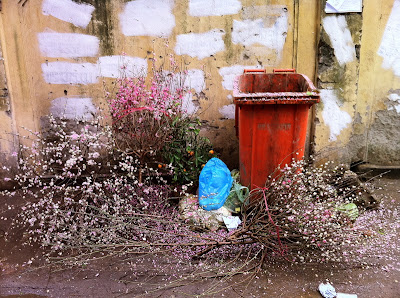 This is a pre-emptive measure that I now completely understand. I'm still finding wayward petals all over our house from when our Tet branch spontaneously exfoliated, obviously after being kept inside past its use-by date. When I carried it to the bin, I left a river of blossoms trailing all the way down the stairs.

I guess this is why there’s also quite a penchant for low-fuss fake flowers that will forever meet the exacting standards of the Hanoi home-maker: 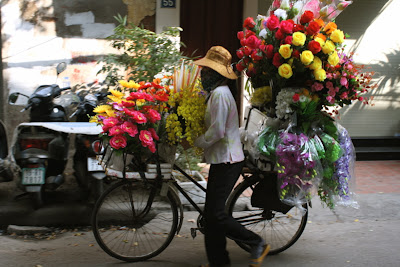 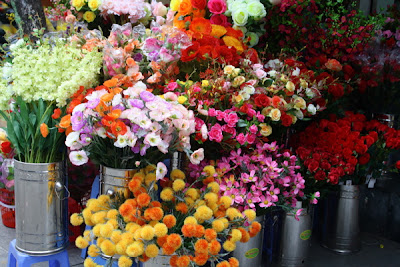 Since flowers are usually an everyday purchase, you really need to up the ante if you’re buying them for a special occasion (and there is twice the number of special occasions in Vietnam, where men can receive flowers as happily as women). And nothing says special like glitter: 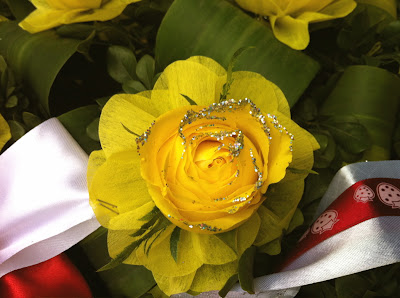 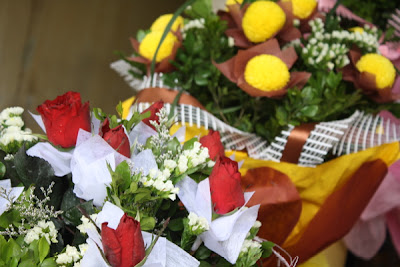 The bedazzled flowers here are really a cut above anything I've seen before. You basically get more decoration than actual flower. If you think you can pull apart the arrangement to liberate the flowers, you’re wrong: they’re actually only on five-centimetre stems that are stuck into foam and presented atop a stick: 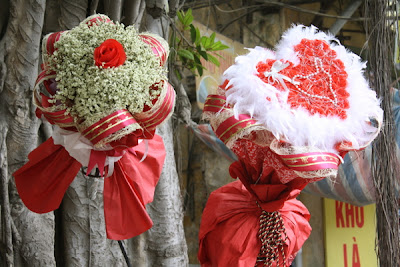 A couple of days after any floral-centric event (the biggest of which is International Women's Day, celebrated in Vietnam not with street marches but with flowers, because, you know, chicks really dig flowers), the streets are littered with discarded bouquets, with their decorations and wrapping perfectly intact: 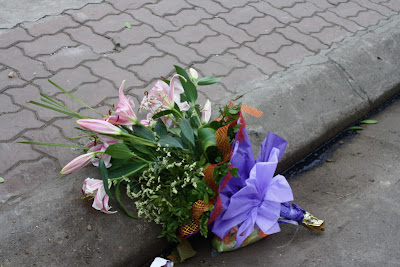 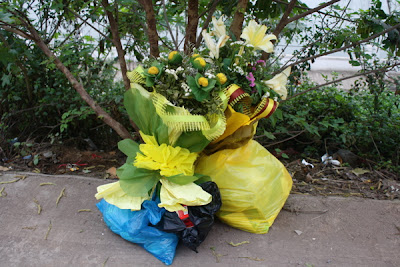 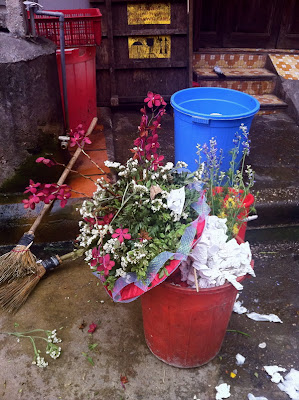 The same goes for the elaborate standing displays that are given to newly-opened businesses. The first sign of a drooping gerbera and they’re in the bin, holus-bolus: 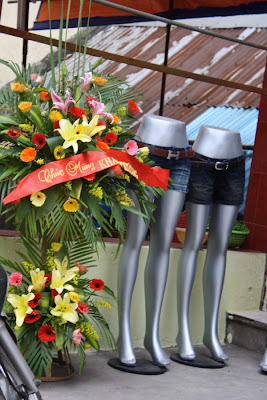 (Just what Hanoi needs - another shop selling tiny denim shorts!)
A friend of ours actually fished some of those wicker floral display stands out of the bin to use as very fetching pedestal tables in her house, thus confirming my theory that Westerners and Vietnamese have very conflicting ideas about what does and does not constitute rubbish. In this same topsy-turvy world gerberas – relegated to cheap petrol-station bouquets in Australia – are here regarded as a premium flower, symbolising money and good fortune in business (and not just the petrol-station business). And yet roses are a dime a dozen (or actually, about a dollar a dozen). I like to tell my Vietnamese friends the price of roses in Australia just to watch their eyes widen. 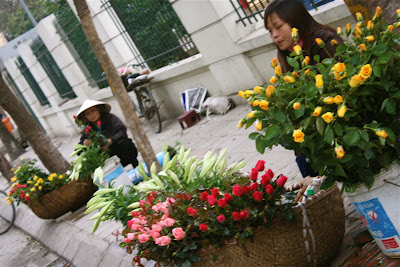 And where does all this leave Nathan, who used to buy me so many - and such extravagant - bouquets from Erskineville Florist that the guy who worked there knew him by name? He still buys me flowers here too, and even though they only cost a dollar, they're still just as beautiful. 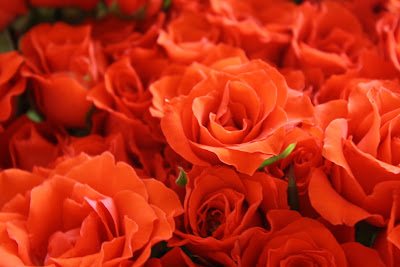