My dad was once disparaging the Australian ski-fields (ambitiously called the Snowy Mountains) to a Canadian ski instructor. The Canadian replied that while Australia might not be renowned for its mountains, it's still one of the only places in the world where you can ski amongst the gum trees. I guess you call that positive spin.

Sadly, you can't ski in Hanoi, but I was reminded of this story while jogging around our putrid little Truc Bach Lake recently. It might not be much, but it's probably one of the only places in the world where a jogger can know what it's like to have an old lady launch a teapot of sodden tea-leaves at their knees as they pass by. It's very cooling on a hot day, really.

Our first year in Hanoi, we found the idea of exercising outdoors abhorrent. At home we were used to running around bays, down empty suburban streets, and across the Harbour Bridge. We thought the amount of pollution we'd inhale here would surely counteract any positive gain from the exercise; we thought that people would stare at our red, puffy faces; we thought there physically wasn't enough room in this town to run.

Several months and kilograms later, we're out running on the road, breathing that exhaust deep into our lungs, waving to the cat-callers as we pass by. I won't lie: it's not ideal. But like the ski-fields in Australia, the experience is at least unique.

Joggers in Hanoi aren't relegated to the footpath like some second-class citizen. They get to run on the road, with equal reign to any motorbike, and sometimes they even get to outpace the cars. Pounding that black tarmac, you can imagine you're running a marathon in a city where they've shut down the roads to let you pass gloriously by. Except in this case, the road hasn't actually been shut down. Win-win, right?

In Hanoi, joggers don't just blend into the masses of virtuous lunch-time exercisers, they get to be the star of the show. Nothing really turns the heads of the parking attendants, the fruit vendors, the old coffee-drinking men, the construction workers, the local school children, or anyone really, than a beetroot-red, sweating, hyperventilating, foreigner wobbling past. Best of all is when two men on a passing motorbike are so taken with your athletic prowess that they'll actually stop their bike a bit ahead of you, crane their necks around and cheer on your approach with shouts of "Hello! Hello! Hello! Hello!". They're like your personal support team! If only they passed you little cups of Gatorade too. 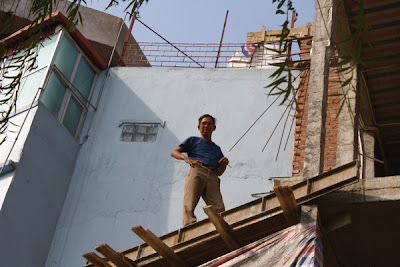 And while you might look (and feel) like you're about to keel over from a heart-attack, don't worry, Hanoians are there to help you! Not one lap around the lake will go by without several enticing offers from xe om drivers of a motorbike-taxi ride. Nor will street vendors think that being engaged in vigorous exercise precludes you from buying their produce. "Yes, I would love to buy some bananas!" you say, and then you tie them to your ankles as leg weights.

And then through one nostril you breathe in the exhaust, in the other, the aroma of rotting fish; you skate along on a discarded corn cob for a while, then leap gracefully over an open sewer, landing softly in a pile of old roses lying in the gutter; you're temporarily blinded as you run through the smoke from a bun cha grill, but then a street-cleaner drives past and restores your sight with a delicate spray of Hanoi's finest H20; a free-range chicken gives you a high-five as you complete your third lap, and on your fourth, the guys who sell pirated DVDs form a guard of honour; and you think to yourself, if only all those people doing the Bay Run right now, as the sun sets on the harbour,  could know what they're missing out on. 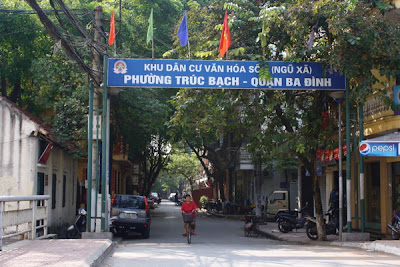