It was pretty exciting to read in the news that “banh mi”, the Vietnamese sandwich, has been added to the Oxford English Dictionary (although the prestige associated with this event was considerably undermined by the fact that “muffin top” also made the grade).
Of course, it would have been more exciting if the Hanoi banh mi were actually as delicious as the definition made them sound. Unlike in Saigon, or indeed, in Vietnamese bakeries anywhere else in the world, the banh mi in Hanoi (or bánh mỳ as they’re actually called here) consist not of a crunchy explosion of sweet pickles and herbs, but of a smear of grey pâté and, if you’re lucky, one smidgen (technical culinary term) of carrot. They do not, for example, look like this Wikipedia image:

Bitterness aside, I found this news exciting nevertheless as there surely can’t be too many other words that Vietnam has gifted to English. Straining my brain very hard, I can think only of “pho”, and “Viet Cong”. Vietnamese is instead one of those languages that has usually received the linguistic gifts, mostly from Chinese way back in the day (I don’t think Vietnam has been in the habit of receiving gifts of any sort from China for quite a while since then).
There’s also, unsurprisingly, a whole load of vocabulary borrowed from French, which, as happens to most loan words in most languages, has been given some local flavour.

As I mentioned in a previous post about learning Vietnamese, the essential characteristics of a Vietnamese word are little two- or three-letter syllables, with accents and tones, strung together to make compound words. So, for example, your aforementioned Hanoi “bánh mỳ” comes with grey “ba tê” and a smidgen of “cà rốt”. Instead of “fromage”, you get “pho mát” (and then, naturellement, you get Laughing Cow cheese). For “gateau”, you get “ga tô”, which might be flavoured “sô cô la” (“chocolat”) or “va ni” (“vanille”). “Cravate” is “ca vát “, “gare” is “ga”, “beurre” is “bơ”, “valise” is “va li”, "café" is "cà phê", “buffet” is “búp phê”, “sauce” is “xốt “, "salade" is "xà lách", “film” becomes “phim” and “savon” becomes “xà bong”. This also gives you a pretty good indication of what the French brought to Vietnam (cake-eating dandies).

I get a great deal of entertainment out of these loan words. They allow any non-Vietnamese speaker (such as “moi”) to have a whack at the local dialect in what basically sounds like a comically authentic Vietnamese accent (I similarly enjoy pronouncing English loan words in French like I’m Pepe Le Pew: I mean, is “rosbif” not the greatest word ever?). It’s quite disappointing that Vietnamese has bucked the global trend and thus far resisted most gifts that English might have offered it, really limiting my comedy accent stylings. Although I am grateful for “ti vi”.

If you at home would also like to try speaking Vietnamese like a native, then I offer you this map of Ôx tơ rây lia, as photographed in the bathroom of a local restaurant for your enjoyment: 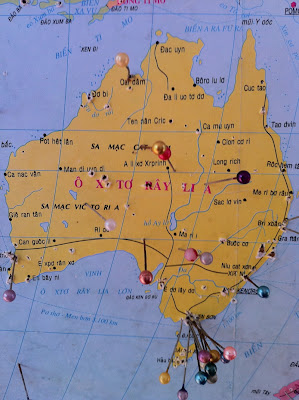 Email ThisBlogThis!Share to TwitterShare to FacebookShare to Pinterest
Labels: banh my, French, language