By virtue of repetition, one of the first words you learn in Vietnam is “Tây”. It means “Westerner”, but the literal meaning has been extended to apply to pretty much any foreigner. You hear it as you approach any street vendor – “Tây! Tây! Tây! Tây! Tây!” – usually as one vendor alerts another to your approach like that of an incoming missile. An incoming missile made of dollar signs. As you walk through a market you’ll hear shouts of “Tây oi!” from every stall-holder, trying to attract your attention so they can then seal the deal by waggling a cauliflower in your face. Grandparents with toddlers will physically turn the child’s head and point at you, and instructively say “Tây!” as you pass by, like they would say “Look, a tree!” or “Look, a bird!”. If it’s Nathan they’re pointing at, the child will then usually burst into tears due to his hideous visage. This is no exaggeration: Vietnamese babies and toddlers find Nathan terrifying. Once, in a restaurant, a small child pressed herself against a wall, turned deathly pale and refused to walk past our table, her gaze fixed on Nathan’s monstrously bald pate and hairy face.
Sometimes when you park your bicycle, you won’t get a number chalked onto your seat like everyone else, you get this: 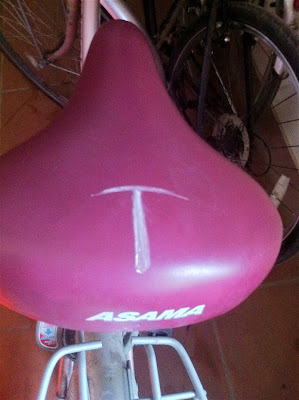 You, and whatever other Tâys you’re with. No need to distinguish amongst you: you’ll all get a “T”.
When I had new passport photos taken, the shop filled in the “Mr/Ms_______” section on the little receipt with “Ms Tây”. When I came to collect my photos, they were filed away under “T”.

So I was overcome with excitement when back in Sydney recently I found this wallet in a boutique store, made from an old Vietnamese feed sack: 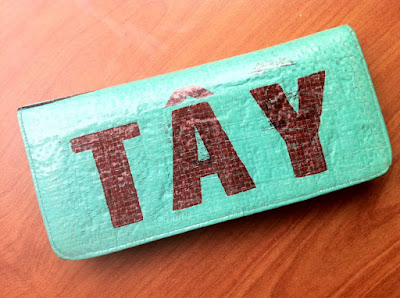 What are the chances! A wallet! That says Tây! Which basically translates as “walking wallet”! I snapped it up at a price of only one million times the cost of a Vietnamese feed sack, excited about single-handedly bringing irony to the Vietnamese people.
The funny – and, I admit, massively disappointing – thing is that absolutely no-one here (other than Tâys, who freaking love it), gives two hoots about my wallet. I flash it hopefully at the cash register, and I see the shop assistant noting it with a blank face: “Yes, a Tây wallet. Indeed she is. That is why she has a Tây wallet.”

Because as far as the Vietnamese are concerned, “Tây” is just an accurate description. It’s not loaded, it’s not offensive, it’s not funny, it’s just true. You get a “T” on your bicycle, not because you don’t deserve a number like everyone else, but because you don’t need one. You look different. They’ll remember you. And all the Tâys get a “T” because they’re hardly going to steal each other’s bicycles, are they? It’s a practical and convenient way of sorting. And since half of the population of Vietnam have the surname Nguyen, they’re more than familiar with problems of sorting.

I don’t mean to say that there’s no racism here. By jingo, there is. But where mere mention of the words “racial profiling” in the West causes people to start frothing at the mouth, here I’m not going to lose sleep over being labelled a Tây. In fact, I’ll embrace it, flaunt my wallet with pride and sing the Tây theme song wherever I go:
Because after all, we ain't ever gonna be Vietnamese.
Posted by Tabitha at 15:12