My friend Julianne, who has supplied the material for so many of the best stories I know about Vietnam, was not the first person to have a Chicken Moment, but she did unwittingly give it its name.
She was in charge of running a field-trip for a group of Vietnamese journalists, to educate them on serious, important issues affecting Vietnam. She spent the whole weekend striving to keep her charges happy and working to convince them to be advocates for her cause. When it was all over, and she was on the chartered bus back to Hanoi with them, she was exhausted and glad to be heading home.
It was at this point, dear reader, that she heard a distinctive clucking coming from the back of the bus. Now, whether or not you think it's appropriate for someone to bring a live chicken back from a work trip is by the bye; the point is that it was the chicken that broke the camel's back.
I heard about what happened next from a Vietnamese colleague who was there to witness the Chicken Moment in all its glory. In her telling, Julianne leapt up from her seat - her face bright red, steam probably coming out her ears - and roared at her VIP passengers: "RIGHT. WHO. HAS. A. CHICKEN. ON. THE. BUS."
The passengers looked on in horror as, right there in front of them, the Crazy Tây Lady then completely lost her rag, and also, her mind.
When, on Monday, I unsuspectingly asked my colleague how the weekend trip went, the first words out of her mouth were, "Oh my God. Julianne go CRAZY".
And thus the Chicken Moment was born.
The essential ingredients are:
1 Culture Clash
1 Crazy Tây
A handful of Aghast Vietnamese Onlookers
1 Aftermath of Intense Embarrassment.
Chicken is optional. 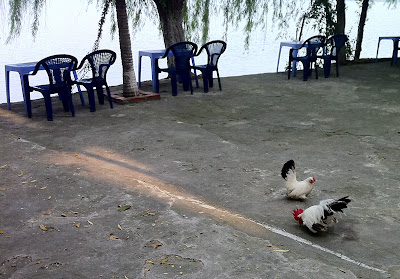 These short-legged chickens live near our house. Every time I see them I sing, in homage to Flo Rida, "Chicken got low, low, low, low, low, low, low, low". They like it.
The circumstances of the original spark, the Culture Clash, are not really that important because under the right circumstances even the most accepting, culturally-sensitive, open-minded and assimilated Tây can snap at the pettiest of things. For one brief moment - indeed, the Chicken Moment - you reach the maximum capacity for cultural understanding.
The Aghast Vietnamese Onlookers are actually just as important to a Chicken Moment as the Crazy Tây themself. They're Aghast because, being Vietnamese, the Culture Clash doesn't even register to them. Often they have absolutely no idea why the Tây is even going Crazy. Plus, in face-saving Vietnam, it's not okay to lose your temper at small things. The only justification for the kind of display you see in a Chicken Moment is if the phở shop next-door is poaching the customers from your phở shop, in which case you should go at them with a meat cleaver.
And so imagine how it looks: a Tây, frothing and seething, violating all the tenets of public decorum that you know of, shouting - pointlessly - in a foreign language, about you-have-no-idea-what. I don't think I need to go into why there's an Aftermath of Intense Embarrassment. 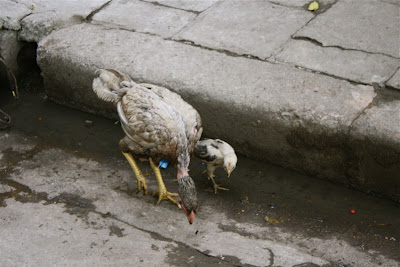 Most chickens in Hanoi are not low, but actually very tall and rangy like this. They don't get a song. I would say the average Australian chicken falls somewhere in between the height of the Vietnamese low and high chickens.
I too have had a Chicken Moment.
It happened as I was cycling along and a passenger in a parked taxi unintentionally opened their door into me. As I was going at my usual tootling pace of about three kilometres per hour, I wasn't flung through the air, or thrown over my handlebars. Instead, I just flopped into the arms of the teenage parking attendant standing nearby.
The reaction of the people in the taxi, the teenage parking attendant, and the people at the surrounding food stalls, was to laugh. Because not only was it solid gold slapstick, but the typical Vietnamese reaction to anything a bit awkward is to laugh. And a big fat Tây flopping into a teenage parking attendant: that's a bit awkward. This is in comparison to the Western reaction to a pratfall, where you ask if they're okay, they pretend they're okay, you walk around the corner, and then you laugh at them behind their back.
So there's the Culture Clash. And now, the Crazy Tây.
Not in the wildest stretch of anyone's imagination did I suffer a flop-related injury. But I guess I got a bit of a shock (look at me trying to justify my behaviour!). Anyway, the Crazy Tây (ie. me), while flustered and still disentangling herself from the teenage parking attendant, then did a deranged, sarcastic laugh back at the onlookers - "HA HA HA HA HAHA" - followed by that classic tantrum line, "IT'S NOT FUNNY" (there was a swear thrown in there too, but I have edited it out, due to the Aftermath of Intense Embarrassment).
The baffled, horrified look on the faces of all the Aghast Vietnamese Onlookers is burned into my memory. As I cycled away, I transformed into one giant, pedaling cringe.
And I haven't even told you the worst bit. This happened on our street. I see that teenage parking attendant every day. And every day he must think to himself, "I better watch out, there goes that Crazy Tây". 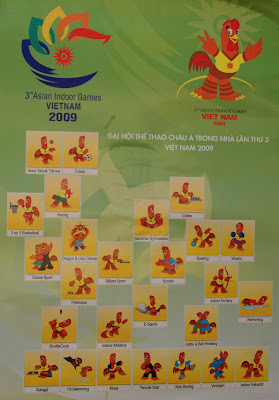 The mascot of the 3rd Asian Indoor Games, held here in Vietnam, was this chicken. I salute whoever designed this poster. It's not easy to illustrate a chicken who can swim, bowl and dance with a fine lady chicken, let alone play chess, e-sports and vovinam (click on the image to see all of the chicken's skills up close).
Thankfully, most people only have one Chicken Moment, although it's a well-acknowledged fact that a Tây who stays in Hanoi longer than three years is liable to have more (this is why Nathan and I are firmly committed to leaving Vietnam two years and nine months after we arrived). I've been collecting the Chicken Moments of others, and there are so many mortifyingly great stories. A lot of them seem to take place at the airport. Maybe this is because of the abundance of opportunities for queue-related Culture Clashes there, or maybe, so tantalisingly close to international territory, a Crazy Tây just can't hold their cultural sensitivity together for one minute longer.
But the best Chicken Moment didn't happen at the airport. It is Emily's Chicken Moment, which took place at the public pool where she was teaching a Vietnamese colleague to swim. There they were, splashing about, when a mother, standing on dry land, walked her toddler, also on dry land, over to the edge of the pool, so he could wee, from dry land, into the pool. The pool Emily was in. Picture the frothing, bright red, gesticulating, screaming Crazy Tây, but now, in the water. An Aquatic Crazy Tây.
Now, you might be thinking that directing your child to wee into a crowded public pool isn't a Culture Clash, it's Just Wrong In Anyone's Books. But here in Vietnam, children's wee isn't seen as gross; it's as pure and delightful as the finest champagne. I have watched the ten-year-old over the road stand on his doorstep and wee fountains of sparkling champagne right onto the footpath outside where his family sit and cook. I have seen a mother assisting her child to wee enormous puddles onto the floor of a public toilet, right where people were standing, because the cubicles were occupied.
And so, as defines a Chicken Moment, Emily's Aghast Vietnamese Onlookers had no idea what the Crazy Tây was carrying on about. Was she drowning? Was she having a seizure? Either way, her tantrum was for naught. Vietnamese children will be peeing into that pool for many years to come.
And what of the Aftermath of Intense Embarrassment? Surely Emily stood by her reaction, right? I'll just say that soon after the Chicken Moment, Emily's colleague told her she had found a new swimming instructor. After all, who wants to put their life in the hands of a Crazy Tây.
Posted by Tabitha at 17:34