This post is dedicated to all the wintering Australians whose status updates about the cold and the rain and the grey are clogging my Facebook news feed. Suffer in your jocks, friends.
Red 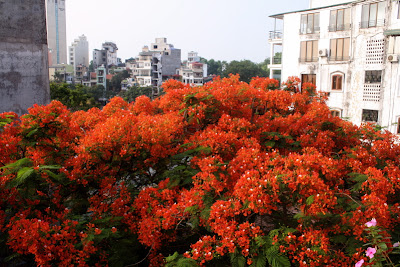 This is the tree outside our house, which Debbie correctly predicted would get red flowers. But saying it like that makes it sound like a mere botanical fact, when it can only properly be described as a Goddamn Botanical Spectacular. Every day I would take a photo of it thinking that surely, this is as OTT as it’s going to get, but no, it just kept on going. I guess they don’t call it a Flamboyant for nothing, eh?
It did eventually reach a pinnacle of redness and floweriness, at which point I assumed it would just explode. But instead, like the poignant end of any great Flamboyant’s glory, some wild winds blew up (see: Orange, below) and carried the flowers off down the street. It was better to burn out than to fade away, dear tree. See you next June. 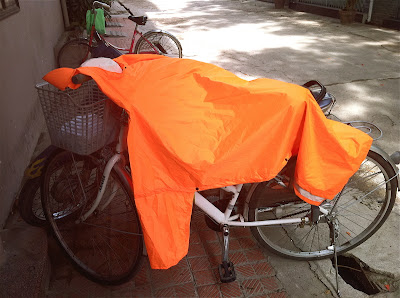 I’m still suffering post traumatic stress from last summer here, even though the new summer has begun. But as I keep telling everyone, like the insufferable old-timer that I am, this summer has nothing on that one (very important qualifier: yet). The difference is that we’ve been enjoying some pretty awesome, cooling storms in the evenings (the photo is of my bicycle poncho drying, by the way, for those who don’t wear ponchos in tropical storms on a daily basis like we do).
The other night, while eating dinner, Nathan and I watched the whipping rain frenzy from our window, noting all our rubbish from the bin as it floated past down the street/river. “Oh look, there goes our lime cordial bottle.” “Oh yes. And our Barilla spaghetti box is now stuck on that floating door.” We then saw two thongs go floating by. “Oh look, some thongs”, we said.  The thongs were shortly followed by a thongless man with an umbrella wading through the overflowing sewer water. He located one of his thongs but the other had sailed off around the corner. Nathan opened the window, shouted “Anh oi!” and pointed where his thong had floated off to. The man gave a thumbs up to the creepy, all-seeing – but admittedly useful – Tâys watching him from their eyrie.
Yellow 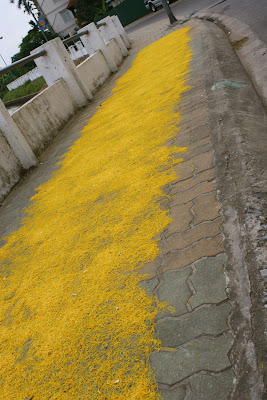 This is pollen drying in the sun. I’m not quite sure what it’s used for (something to do with tea, maybe?). If I was a bee, I would have high-tailed it to this footpath and saved myself a lot of bother flying around to all those flowers.
Every single little patch of land in Vietnam is used, very efficiently, for two things; this one is both a footpath and a pollen drying area/missed opportunity for bees. So you get not just a railing on a bridge, it’s also for drying your rice noodles. It’s not just a shop, it’s also your house. It’s not just a tree with a fan screwed into it, it’s also your hammock holder. It’s not just a hideously polluted lake, it’s also for fishing and for using as a toilet (triple points!). The Vietnamese would not brook nature strips, I can tell you that. They’d have a goat out on them in no time.
Green 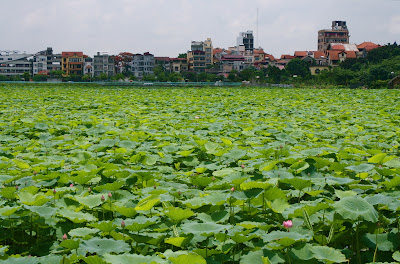 The lotuses on West Lake are stunning at the moment, even if they have mostly been picked to sell to suckers like me who are somehow surprised every single time when they die after only one day. But look at them! How could you resist! 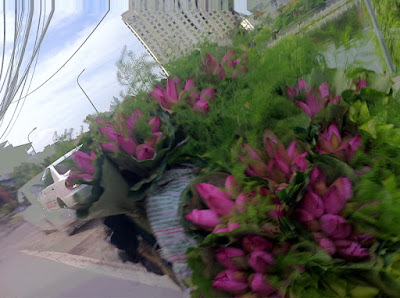 The lotus pods are equally beautiful in their minimalist, Vogue Living kind of way, and definitely last longer. 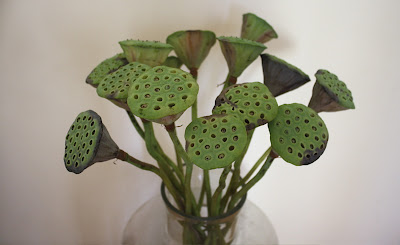 I think these retail in Sydney florists for about a bazillion dollars per stem (here, about $2 a bunch). Last year I bought a bunch of these to put in a vase on my desk at the WWF office. Every single Vietnamese staff member (including ones I had never even spoken to before) then proceeded to pass my desk and say, “Uhh, you know they’re not flowers, right? They’re fruit. You eat them.” Vogue Living has obviously not made it to Vietnam yet.

Blue
When Nathan and I were in Sydney recently we decided to try all the new bars and restaurants that had opened in our absence. Sometimes several in one night. This was not a great decision for our hip-pocket nor our waistlines. Getting dressed for his first day back at work, I thought Nathan’s shirt buttons might actually pop right off. And so, we are now on a fitness drive to get Hot For Summer. We’re definitely some kind of hot. 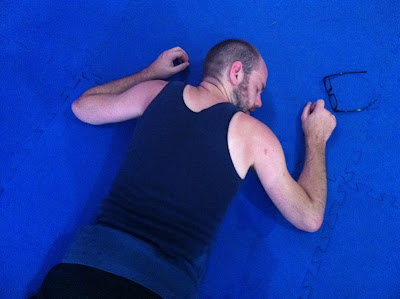 This is Nathan at the makeshift boxing gym where we go, after a night of gin and tonics, a 6:15am wake up call, a double espresso, and one hour’s cardio-boxing to the soundtrack of Destiny’s Child and Katy Perry. You decide which one of those things made him look like that.
And this is Sweat Nathan which he left behind when he eventually got up. 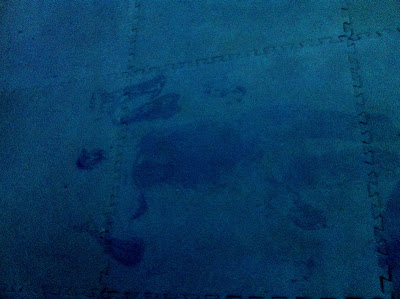 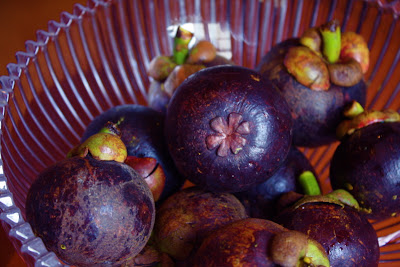 I’m not very clear on what indigo really looks like. Will these mangosteens do? They are, after all, and according to Wikipedia, the Queen of Fruit. Unfortunately for them, this means they’re married to the King of Fruit, which, according to Wikipedia, is durian. Sucks to be you, mangosteen.
Back before we moved here, when we were over-enthusiastically getting Vietnamese lessons in Sydney, and over-enthusiastically following whatever the Wikipedia entry on Vietnamese culture said, we read that if you are a guest to a Vietnamese home, you should bring fruit. So, dutifully, we rushed off to get fruit to take to the home of our teacher. Actually, Nathan was in charge of this task (back when we shared domestic duties, you see… Aah, those were the days) and so he went to the David Jones Food Hall and bought a kilogram of mangosteens, that cost TWENTY DOLLARS. Yes, that is correct. He then bought a gift bag to put them in. Anyway, we then proudly presented the gift-wrapped mangosteens, like try-hards, to our Vietnamese teacher, saying “For you: A Vietnamese fruit!” Our teacher, a Hanoian, answered straight back, “Well, really, a southern Vietnamese fruit”. I can only truly understand now what an absolutely perfect entrée to the real, non-Wikipedia, Vietnamese culture that was. And of course, she then went on to ask how much they were. We lied. She didn’t ask why you’d put fruit in a gift bag, but she should have. In later lessons, she told us not to eat apples from China and that there are no gay people in Vietnam.
Violet
This photo is very violet, but I don’t have anything to say about it (except that Flamboyant Tree kicks its arse): 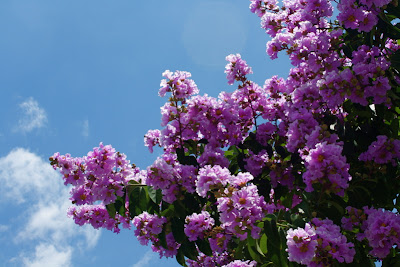 So I will use this. 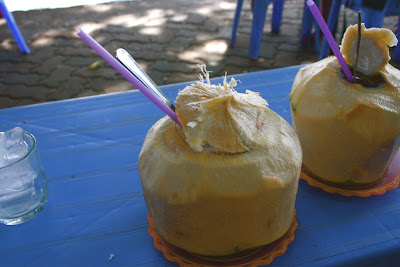 The straws are violet, you see.
News from the outside world has filtered through to us that coconut water is de rigueur now. Apparently you can buy it bottled, pitched as a rehydration drink. Here in Nam, we drink our coconut water straight out of the motherf*ckin’ coconut. That’s how we roll. And we roll just like that almost every day, because it’s so incredibly delicious, and we have a lot of rehydrating to do (see: Blue, above).
A few years ago, when I finished an ill-conceived winter-time holiday on the Trans-Siberian Railway, I remember saying to my traveling companion that next time, I would like to go somewhere – anywhere – where I could drink out of a coconut. To me, that just says “Tropical Island Holiday Paradise”. So even when I’m sitting on a small plastic stool, next to an increasingly pungent lake, surrounded by youths talking loudly on their mobile phones, if I’m holding a coconut, then it’s Tropical Island Holiday Paradise time for me. And you can’t get that in a bottle.
Posted by Tabitha at 16:42