Being a vegetarian in Vietnam

A version of this post was first published in Dan Tri International.

The first time I ate meat after having been vegetarian for over ten years was at the Vietnamese Embassy in Canberra when we volunteers were taken there for a visit before being sent to Hanoi.

We had just eaten an enormous lunch, and the afternoon embassy visit was supposed to be a courtesy call, where we’d shake hands with the Ambassador and maybe drink some tea. Instead we were led to a large dining table in a room dominated by a display of the embassy’s ping pong trophies, where a many, many course meal was immediately laid on us by His Excellency’s private chef.

As I chowed down on those pork spring rolls and beef pho, I remember thinking to myself “Hmm, I wonder if this might be a taste of my Vietnam experience to come”. 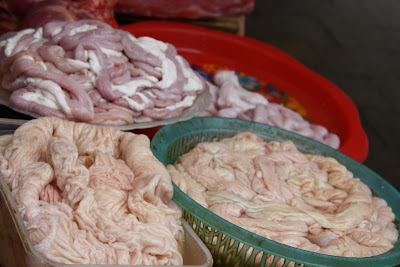 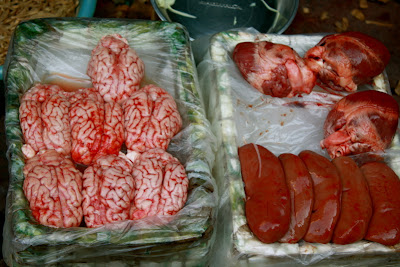 Not suitable for vegetarians.

While it might be easy to be vegetarian at a Vietnamese restaurant in Australia, it is not easy being vegetarian in Vietnam. Most guidebooks to Vietnam make reference to the country’s “great tradition of vegetarianism”, and well may that be the case, but if you’re a vegetarian, and you’re coming to Vietnam, you will experience the great tradition of eating omelette and morning glory for dinner. 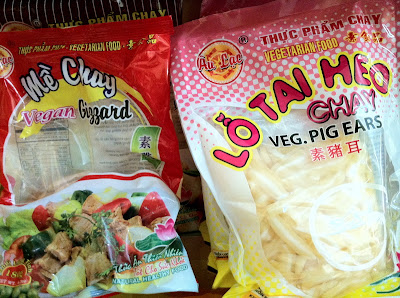 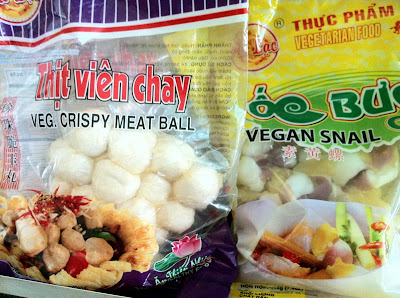 These are some of the appetizing take-home items you can pick up from a Vietnamese vegetarian restaurant.

Vietnamese people are firm believers in the strength-giving qualities of meat. Having spent most of my life answering the question “Why are you vegetarian?” I was surprised to find that it’s not the first question on the meat-chomping lips of the Vietnamese. Instead, since arriving here, the question has been “Aren’t you hungry?” Then there is a one-beat pause as they size me up. And then the inevitable follow-up question: “But how can you be vegetarian and be so fat?” 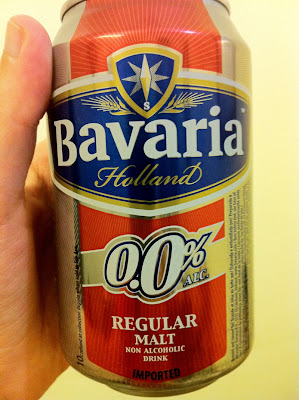 Even the beer is fake at the Buddhist-run restaurants. A can of 0.0% Bavaria goes nicely with your vegan gizzards.

In Vietnam, meat is the source of most of the population’s nutritional needs. So, the thinking goes, if you take out the meat then… what?  A friend told us the story of a six-foot-something, strapping, English, vegetarian man who was repeatedly told by his Vietnamese colleagues that it was dangerous for him to ride his motorbike. Not because he was liable to get run over by a bus, no. But because, being vegetarian, he would be so enfeebled and malnourished that he could topple right over at any time. They probably kept a wide berth from him in the office too, just in case he keeled over and trapped them against the photocopier. 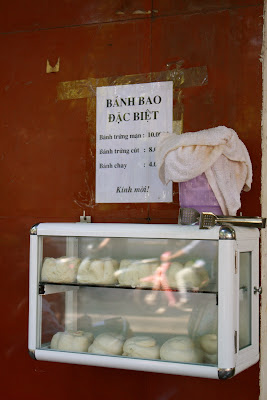 Even though the sign says some of these steamed buns are "vegetarian", what they mean to say is they're filled with nothing. That's right. Vegetarian steamed buns are just buns. Don't fall for it.

When we went to visit a friend’s family over the Tet holiday, she pre-warned her relatives that this crazy Tay would prefer not to eat meat. Very kindly, they prepared an omelette for me. And then her Aunt added pork to it.

“But the crazy Tay is eating the omelette because she doesn’t want to eat the meat”, our friend explained.
“I know”, her Aunt said. “But without the pork she will be too hungry!” 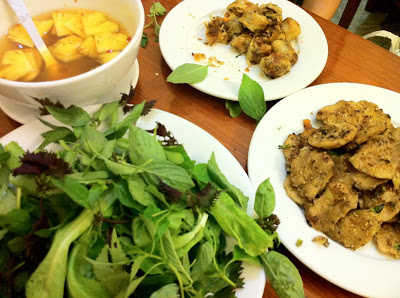 Almost every Friday lunch time, I meet friends for this vegetarian bun cha. It's been a tradition for two years now. None of us has starved to death during that time, that I know of.

And so we’re back to where we began: the omelette. The omelette is to the vegetarian in Vietnam what the mushroom risotto is to the vegetarian in Australia. When Nathan and I did a four-day Mekong Delta cycling trip with all food included, Nathan ate all kinds of pork and fish-shaped things in the meal breaks between the long rides. I ate omelette. At every single meal. For four days. 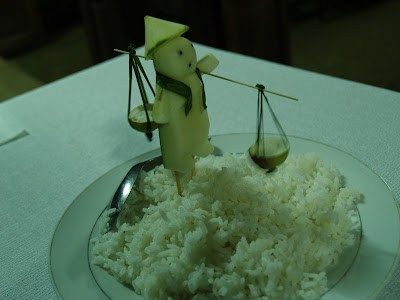 On that trip, this is how they served the rice at one place, so they were forgiven.

The omelettes would have been made with fish sauce anyway. Everything is. A friend of ours who visited a coffee-roasting business reported that they even add fish sauce to the coffee beans. So if you don’t want to eat fish sauce, then you’ll have to eat only at the aforementioned Buddhist-run vegetarian restaurants (where they have fake, vegetarian fish sauce), or at Western restaurants.

For those vegetarians like me who have found their rock-solid ethics have crumbled in the face of fish sauceversity, and who’d like to know what Vietnamese street food in Hanoi is kind of the most vegetarian friendly, I've tried to come up with some suggestions based on my own experience. This is pretty much the most useful thing I think I've ever done - and probably ever will do - with this blog, so it merits being in its very own separate post: