The Mid Autumn Festival in Vietnam is rad. It's like a combination of Christmas, Halloween and the Royal Easter Show. And the legend behind it involves a woman accidentally weeing on a sacred banyan tree. What more could you want?

The festival is entirely for children, with the story going that traditionally during the autumn harvest, children would get neglected. The Mid Autumn Festival is when the adults make it up to them. It's basically kids milking one massive guilt trip. And as any child of divorced parents can tell you, that's the best fun a kid can have.

There are various components to the festival, the first being that mooncake shops start popping up everywhere. This, for example, is a photo processing lab that has decided to temporarily branch into the mooncake game: 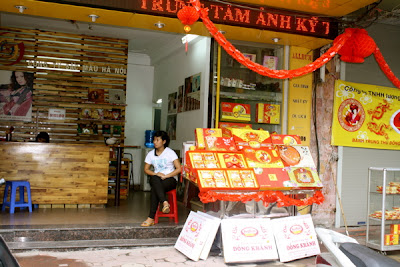 Outside the most popular moon cake shops there is absolute traffic pandemonium. Imagine the David Jones Food Hall on Christmas Eve - if it was filled with motorbikes. Nathan and I cycled past one place on Thuỵ Khuê where the police had actually been sent in with blaring sirens to try to clear the road of jonesing mooncake customers. It wasn't working.

The weird thing is that nobody seems to really like mooncakes all that much. As our Vietnamese friend explained, they're not for eating - just for giving.

As per this dictum, our landlord gave us some, and we didn't eat them: 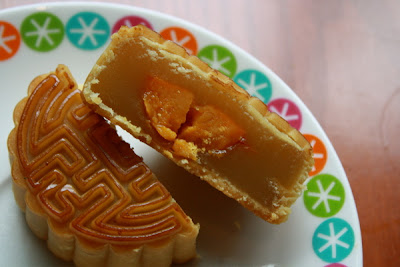 We cut a small piece to try, and didn't need to cut any more. Nathan actually spat his piece out in the sink.  I then went to great pains to conceal the rest of the uneaten mooncake in our bin, so the landlord couldn't happen upon it somehow.

At the time we were dog-sitting this dog, Tiger: 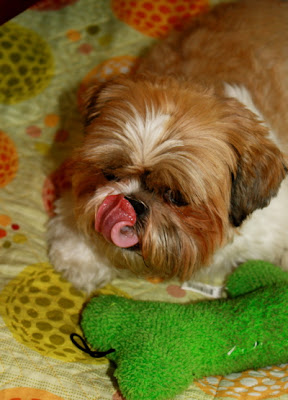 Who you'll hear more about next week, I promise. While we out that evening, Tiger went through the bin, found the mooncake and ate the entire thing. That's 1000 calories for one small dog.

On the subject of dogs, one of the most awesome aspects of the festival is the pomelo dog: 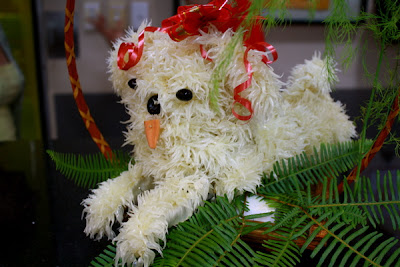 Turning fruit into animal shapes is part of doin' it for the kids: the food is all supposed to be what kids like the most. Bugger the kids, the pomelo dog is amazing in anyone's books. It's an inside-out grapefruit! And a dog!

The Mid Autumn Festival also involves a lot of dressing up. Princesses and fairies and monkeys start turning up all over the neighbourhood: 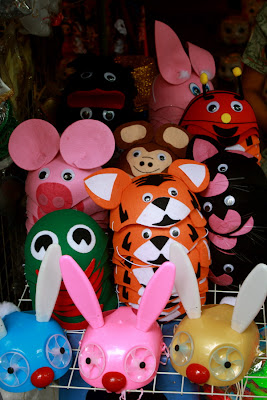 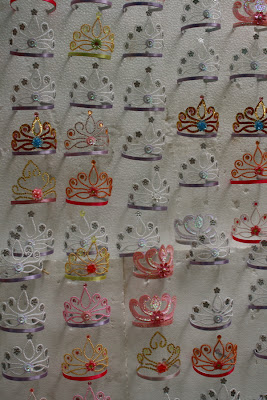 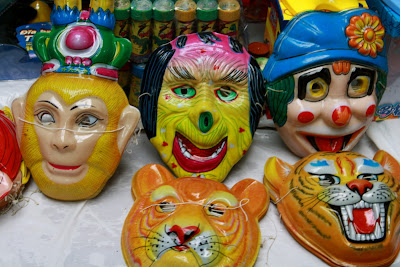 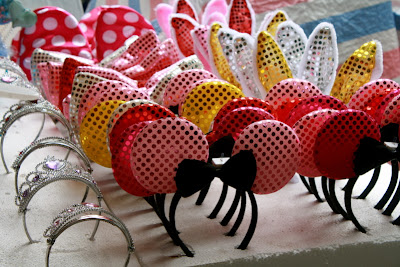 There are also traditional papier mache-masked characters, usually played by the adults at the festival parties: 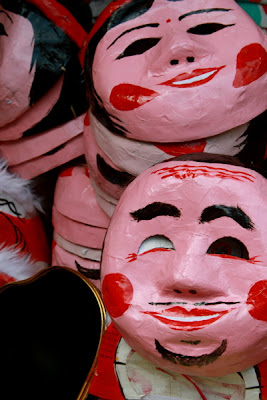 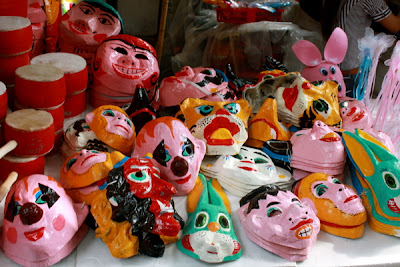 Nathan played the character of Chí Phèo, who is a drunkard and "lovable buffoon", at the WWF office party last year: 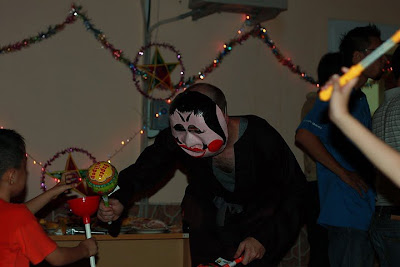 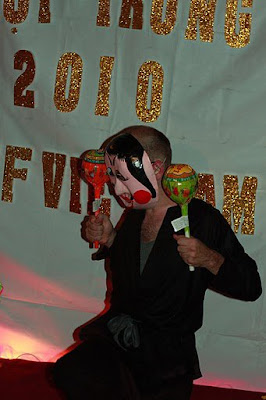 It wasn't hard for him to get into character. In fact, he was such an energetic lovable buffoon that his voluminous quantities of sweat actually transformed the inside of that papier mache mask back into glue and wet newspaper.

We were invited back regardless, and at this year's WWF Mid Autumn Festival party, Nathan sweated even more voluminously, as a saola: 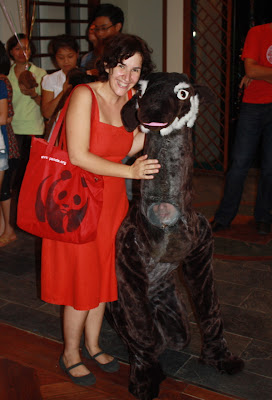 The saola is a critically endangered antelope that is so rare that it's known as the "Vietnamese unicorn". Our friend Nicholas, a specialist in endemic Annamite ungulates (aka unicorns), has been in Vietnam for five years studying the saola. He's never seen one. In fact, no scientist has ever seen one in the wild.

Luckily Nicholas was at the party: 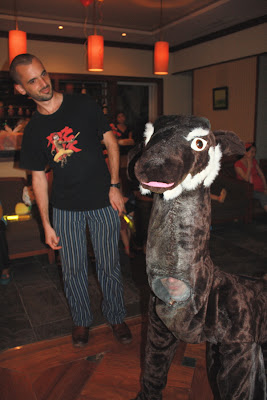 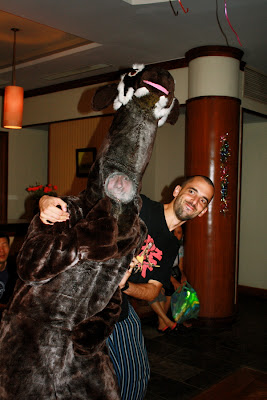 I haven't seen Nathan since then. I think he's been flattened between the pages of Nicholas' PhD thesis.

As well as the costumes, there's a whole load of other paraphernalia. Hàng Mã, the street in the Old Quarter which specialises in festive decorations (you might remember it from the post about Tet) goes mental as adults fight over lions and drums and lanterns and pentagrams. Imagine the showbag hall at the Royal Easter Show - if it was filled with motorbikes: 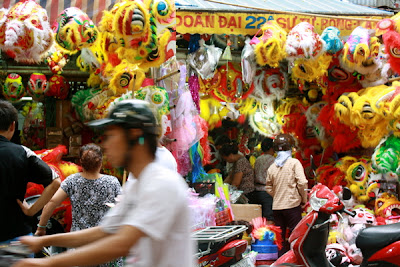 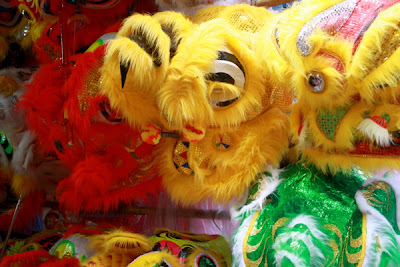 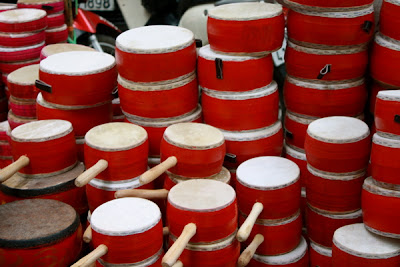 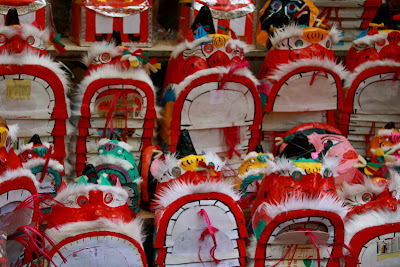 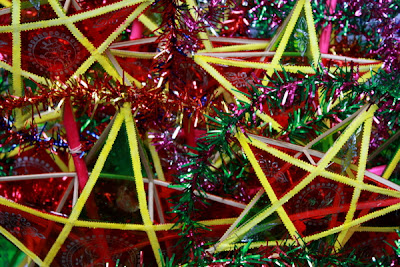 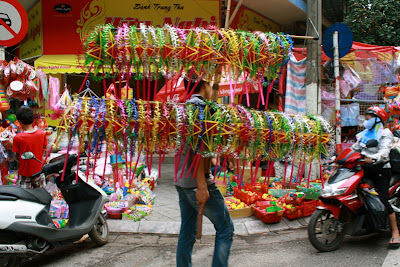 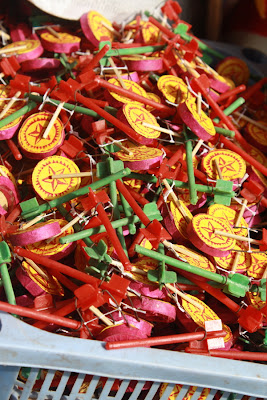 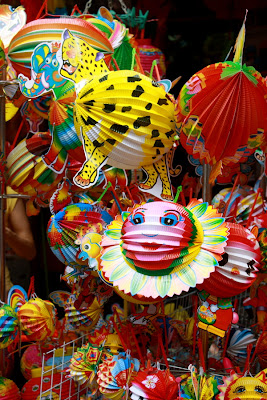 And no kids' festival would be complete without a whole load of crap plastic toys. Battery-operated plastic lanterns are particularly favoured, but anything that lights up and beeps annoyingly will do: 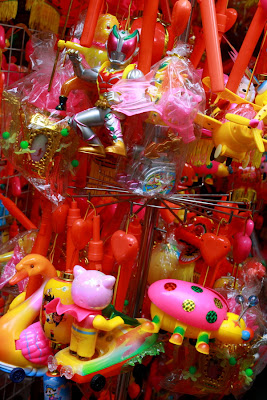 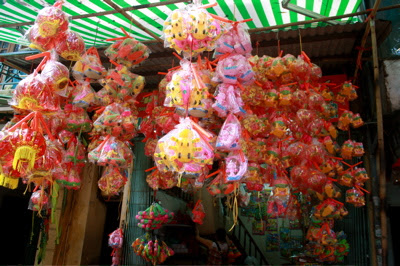 The wiser parent will take the quieter option of a toy kitchen set: 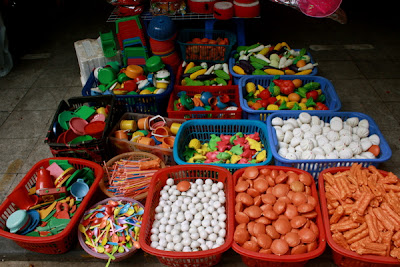 I know it makes perfect sense, but I was super excited that these toys specifically reflect the Vietnamese kitchen, complete with miniature quay, banh bao, steamers, thermoses, tiffin tins, charcoal burners, and those plastic covers to keep flies off the food. I was disappointed, though, to see the plastic stools hadn't been further miniaturised. I guess that's not really possible.

On the actual night of the Mid Autumn Festival, boisterous brouhaha lions parade the street and all the children come out to watch. Sadly none of the lions vomited up a diamond ring this time.

The lion dancers on our street are actually the local xe om (motorbike taxi) drivers who usually stand on the corner and shout "Moto! Moto!" as I pass by, even if I'm on a bicycle at the time. I really like this amateur, community involvement. It's like when the school principal plays Santa, and it's simultaneously so much crapper, and so much better than a professional Santa.

You can see in this photo that the xe om driver/drummer has actually kept his helmet on, just in case a fare comes along mid-performance: 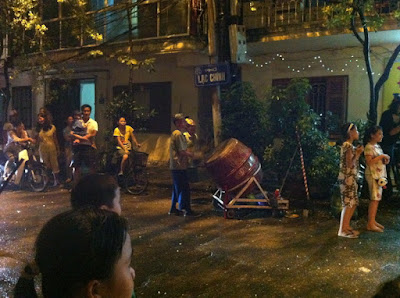 Last year one of the xe om drivers melted his nylon pants with a bit of poorly aimed fire twirling, but there were no such disasters this year: 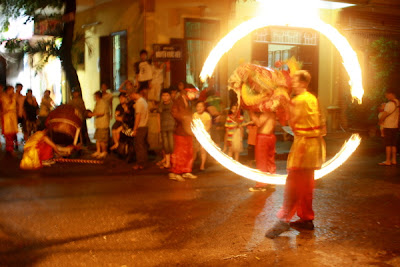 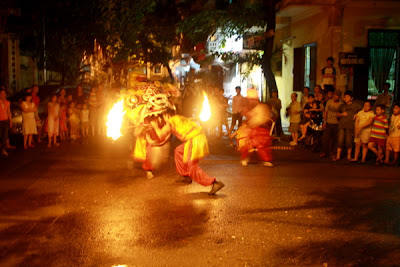 Just a bunch of kids out late at night in their pjyamas, wielding plastic, flashing toys, and enjoying the one time of the year when everything really does revolve around them.
Posted by Tabitha at 06:35