The reason this post is not called "Vegetarian street food in Hanoi", is because such a thing pretty much doesn't exist. And I know it's not very "friendly" to eat the fishies fermenting in your fish sauce, but you're hard pressed to get any fish sauce-free Vietnamese food, and it's damn near impossible if you want to try street food in particular.

So these suggestions come from my "best efforts" approach to being vegetarian in Hanoi, and will hopefully prove useful to any fellow vegetarians who don't want to be permanently relegated to the city's (still excellent) vegetarian Buddhist restaurants.

Handy hint: Much more successful than trying to say you’re “ăn chay” (vegetarian) is the phrase “không thịt” which means “no meat”. If you can’t pronounce it, then write it on a piece of paper and flash it around with wild abandon.

Another important piece of veggie vocab is “xì dầu” which is “soy sauce”, which you can ask for as an alternative to the ubiquitous fish dipping sauce. Many places don’t have it though, so if you’re super dedicated you could always carry in your bag a few of those little plastic soy sauce fish you get with sushi. You can try asking for no fish sauce (“không nước mắm”) in the cooking, but good luck with the results! 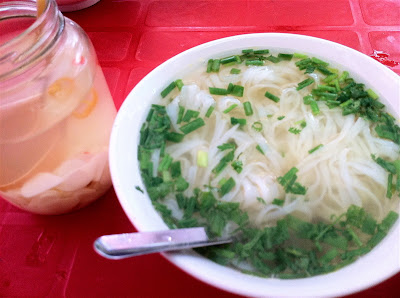 Without the meat, Hanoian pho is just a bowl of broth with noodles, and the broth is – of course – made almost entirely from chicken or beef stock. But if your ethics aren't as strong as your desire to eat phở in Hanoi, then ordering "phở không thịt" at any phở stand won’t raise any eyebrows. At some places you can get an egg (“trứng”) thrown in too.
Where: Practically everywhere at breakfast time. 49 Bat Dan has a well-earned reputation.

At any place which has an enormous blackened wok out the front you can get phở noodles stir-fried with morning glory and sometimes a few tomatoes (and margarine and cheap oil and MSG and sugar). Just ask for "phở xào không thịt".
Where: Look for a flaming wok, or try Nui Truc street, near Giang Vo. 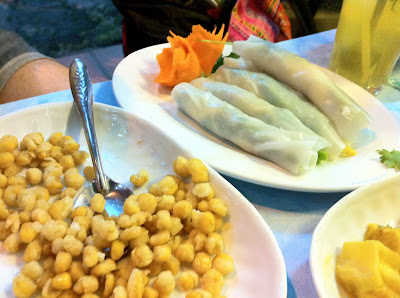 "Phở cuốn" are rolls made from sheets of phở noodles. They usually contain beef, but you can also get them with fried egg, and some lettuce and herbs inside. At the phở cuốn joints you can also get “phở chiên phồng không thịt”, which is deep fried pillows of phở noodle squares, served with fried greens. And also, as featured in this photo, fried corn ("ngô chiên"), which counts towards your daily vegetable quota, right?
Where: Anywhere on Ngu Xa street, or around the corner at 7 Mac Dinh Chi. 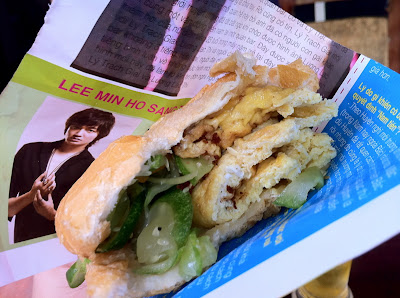 It’s kind of strange living in Vietnam and fantasising about the Vietnamese salad rolls I used to get from the bakery next to Newtown station, but I do. You can’t get those here, but you can get "bánh mỳ trứng", which is egg fried with MSG and served in a roll with cucumber and spring onion and drizzled with fish sauce or soy sauce. It’s amazingly delicious.
Where: Any stall with bread rolls on display and a little frying pan on a charcoal burner. There’s usually a lady at lunchtime standing on the corner of Ly Quoc Su and Ngo Huyen streets. 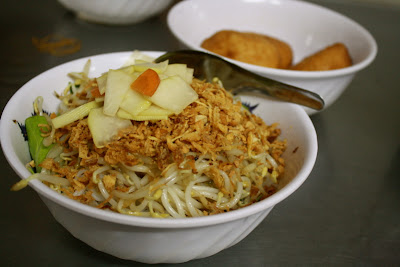 A southern dish usually served with beef, without the meat it’s still a tasty and satisfying lunch of rice vermicelli noodles, herbs and broth topped with bean sprouts and peanuts. Pretty sure the broth is made with some kind of meat stock or fish sauce though.
Where: 67 Hang Dieu street or 49 Xuan Dieu street 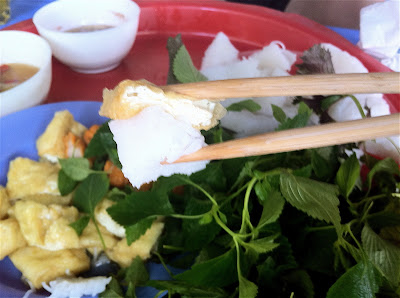 Fried tofu cubes served with squares of cold rice vermicelli noodles and herbs. It’s usually sold with fermented shrimp paste as a dipping sauce, so if you don’t want this you can ask for “nước mắm” (fish sauce), or “xì dầu” (soy sauce) if they have it, or you can forego dipping sauces all together (which would be a bit crap, since it's a dish designed around dipping).
Where: Anywhere you see someone deep-frying tofu cubes. There’s a regular lunchtime stall near the Chau Long market, on Nguyen Truong To on the corner with Tran Vu.

Image from Bếp Rùa
This is papaya salad, drenched in a sweet, spicy fish sauce and served with crushed peanuts. It usually comes with dried pork on top, so you need to specify “không thịt”.
Where: Hoan Kiem Street, often unmarked on maps, which runs between Cau Go and Dinh Tien Hoang, near the Water Puppets.

These are nothing more than deep fried sticks of dough, served with a sweet fish dipping sauce. A delicious and unhealthy snack. You can also order quẩy when you get phở for dipping in the broth.
Where: In the evenings on Hang Bong street, near corner of Phu Doan

Deep fried banana (chuối), sweet potato (khoai) or corn (ngô) fritters that are sold more commonly in winter, it seems. These sound more delicious than they are, in my opinion, tasting mostly like deep-friedness and not much else.
Where: Pho Yen Phu, near the turn off for the Intercontinental Hotel Xôi is served with a few different meaty type things, but you can also get it just with peanuts, mung bean paste or egg. You can even get it with ice-cream ("kem xôi"). It seems too good to be true that this could be a truly vegetarian dish, so I suspect the rice is probably made with lard.
Where: Xôi Yến at 35B Nguyen Huu Huan, where you can conveniently point to the toppings you want

Cơm Bình Dân stalls are cheap workers’ lunchtime spots with a glass display cases of several types of food (usually gone cold after sitting there for a while) served with rice. You’ll always be guaranteed a vegetable side dish of some description at these places, and cabbage pickles, and sometimes a tofu or egg dish. Just check the tofu isn’t hiding little parcels of pork. Sneaky buggers.
Where: All over the joint at lunchtime. The food is always displayed out the front, like in a food court display. 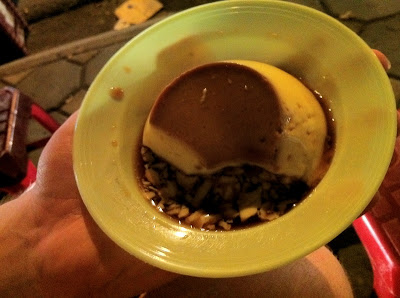 Thankfully vegetarians can go gangbusters at dessert-time and eat all the same sweet street food as everyone else. To celebrate, you should eat as many street-side crème caramels as possible.
Where: 29 Hang Than street

Available from the same place as the crème caramel, "sưã chua nếp cẩm" is fermented black sticky rice served in a cup with yoghurt. Tastes kind of like someone spilled a glass of red wine in your rice pudding. Delicious.
Where: 29 Hang Than street

A summer time favourite, this is simply diced fruit served with condensed milk and crushed ice in a glass.
Where: All along To Tich street 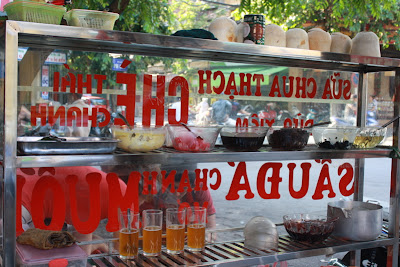 Pick ‘n’ mix desserts of sweet beans and strange gelatinous things and coconut milk. I would eat this every day if it wasn’t guaranteed to cause diabetes. In winter, you should also try “bánh trôi tàu nong”, which is black sesame-filled dumplings in a hot ginger broth and “chè chuối nướng” which is grilled banana with tapioca in hot coconut milk.
Where: 72-76 Hang Dieu street
Posted by Tabitha at 16:17