A friend of ours met his girlfriend on a plane. To me this is, first and foremost, astonishing. Who is in any fit state to woo during air travel? Not me. I have to focus all my attention on an unwavering vigilance against any unusual sounds or other indications that we’re about to find ourselves in an episode of Air Crash Investigation.

So when I heard him tell the story of finding love in the window seat, all I could think of was “BRACE! BRACE! BRACE!” But a Vietnamese girl also listening intently to the tale replied breathlessly, “That is the most romantic thing I’ve ever heard! It’s just like a Korean movie!!!”

To the Vietnamese, Korea represents the highest possible pinnacle of romance. For this reason there is a secluded street near West Lake in Hanoi which is known as “Korea Street”. Of an evening young lovers go there on their motorbikes to pash under the stars, gaze out across the water, and paint romantic messages on the road: 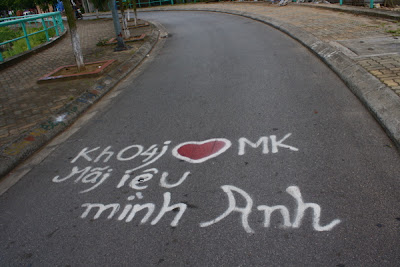 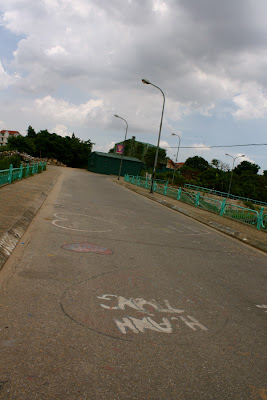 Do they paint messages of love and devotion on roads in Korea? I don’t know. But it seems like the kind of romantic thing that Koreans would be all in favour of.
In Vietnam, as in many other Korea-loving countries throughout Asia, Korean stars dominate the cinema, the airwaves and the tabletops: 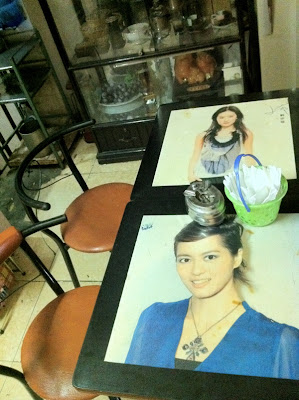 Which is much better than the possible alternatives: 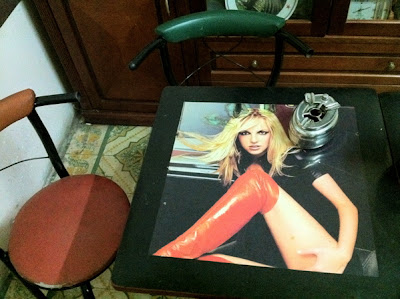 Vietnamese television seems to consist almost entirely of Korean soap operas, dubbed using a single, emotionless female voice-over for all the characters. It doesn’t matter that she’s emotionless because there’s more than enough overwrought drama onscreen to make up for it.
According to The Economist, the rags-to-riches storylines of these dramas are “able to speak directly to audiences who have lived the Asian economic boom of the past two decades. Popular characters often abandon monotonous middle-class jobs to seek fame, or a “dream job”—perhaps suggesting that many Asians feel dissatisfied with their careers, despite the prosperity that has come with growth.”

Whatevs. It’s clearly all about the hair: 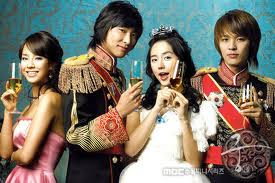 The Vietnamese news media is always concerned about what crazy hijinks the youth are up to lately, so naturally, they’re concerned about Korea. According to Dân Trí, a newspaper with really amazing columnists:

“Girls and boys try their best to reproduce love scenes they've seen in Korean movies. This influence has penetrated so deep into the national psyche that it has influenced the sacred Vietnamese wedding. Young couples now often opt to take their wedding photos dressed in Korean fashion. Korean restaurants in Hanoi, such as Sochu, Cook and Cook and Han Kanh offer young people a chance to pretend not to be Vietnamese for an hour or two. Although the "Korean Wave" may be immensely popular and satisfying for the youth, this cultural invasion, if it continues to grow, could pose a threat to Vietnamese identity.” 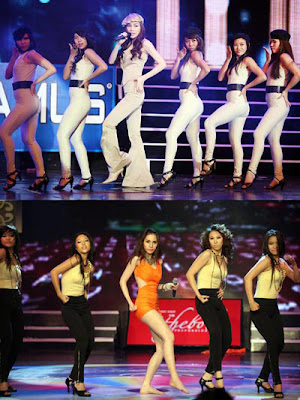 Vietnamese singers apparently pretending not to be Vietnamese by impersonating K-Pop stars. Because Vietnamese pop stars would never – I repeat, never – wear berets and shiny white leggings.
While Korea is busy exporting its hair-dos to Vietnam, Vietnam is busy exporting its brides to Korea. Before I moved here, it didn’t occur to me that the biggest market for Asian mail-order brides would actually be other Asians, but so it is, apparently “because fewer women in their homelands are willing to wed and take on a traditional role”.

Marriage brokers send more Vietnamese women to South Korea than to any other country. And what happens to these lucky brides who get to go to the most romantic country in the whole wide world? Well, apart from getting stabbed, beaten, imprisoned, enslaved, discriminated against, sexually assaulted, or matched with mentally ill, poor, violent, or alcoholic husbands, they’re no doubt living the rags-to-riches tales as played out on the Korean soapies.

Not to be outdone by its mortal southern enemy, North Korea has wowed Vietnam with an export of its own, in the form of Hanoi’s Pyongyang Restaurant: 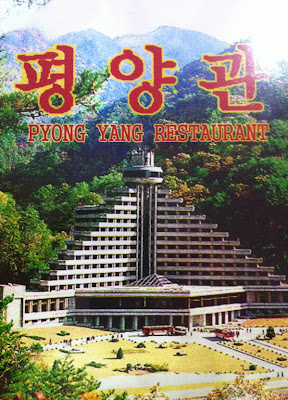 The restaurant is part of a North Korean chain found in China and a few southeast Asian countries, and reportedly controlled by Bureau 39, the "money making" (and money-laundering) arm of the Korean Workers' Party. These restaurants are apparently forced to make annual payments of between $10,000 and $30,000 back to the DPRK government, “but if there's even a small default or lack of results, then the threat of evacuation is given.”

This would explain why the waitresses at Pyongyang Hanoi are extremely keen to upsell you to larger and more expensive dishes. Actually, “upsell” doesn’t really cover it. It’s more like an offer you can't refuse:

Customer: I would like this dish here please.
Waitress: No, you will have this other larger and more expensive dish. 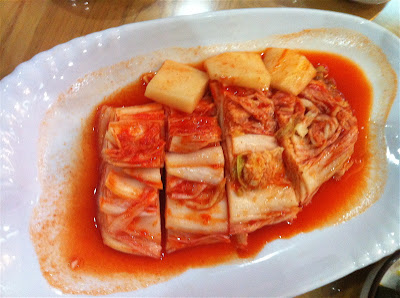 Umm, but I don’t want that much kim chi.
The waitresses are apparently specially chosen by the North Korean regime for this privilege of working overseas, and are strictly screened beforehand for their patriotism and loyalty, to prevent defection. It’s hard to dine at Pyongyang without feeling anxious about the lives of the staff, and what happens to your money after you’ve paid for your super-sized plate of kim chi. You yearn for the soothing tones of some guilt-free South Korean K-Pop to assuage your conscience.

And because the North Korean government can read your mind (and probably this blog: Hello! Or should I say: 안녕! ), at that very moment the waitresses put away their pads and pens and this happens:
Then the song finishes, and they go back to upselling to save their lives.
Posted by Tabitha at 15:37