How to get married in Vietnam

Now that we've gotten the boring old photos out of the way, we can move on to the real business: the party.

Nathan and I have been mildly obsessed with Vietnamese weddings ever since we went to this one a couple of years ago. As we sat there, agog, in our Monday lunch hour, with the miniature bride and groom dancing before us, and the fireworks, and the champagne pyramid, and the exploding balloons, and the golden glitter shower, we knew, as certainly as we've known anything, that when it comes to wedding receptions, the Vietnamese have run away with the game.

There are many beautiful, traditional elements of a Vietnamese wedding which you can read about here. They involve rituals of receiving the bride and groom at their respective family homes over several days, and exchanging elaborate gifts. Now, not being Vietnamese, and not having a Vietnamese family, we're unable to partake in, or truly understand, these traditions. So we cut to the glittery, sparkly chase with our Vietnamese wedding plans and just had the reception. Champagne pyramid, here we come.

The first step was choosing a date. In Vietnamese culture the bride and groom attend a fortune teller to learn the most fortuitous date to hold their wedding, which is how you can end up with your wedding on a Monday lunch-time. Being Tays, who love advance planning, and scheduling, and weekends, we decided to set our own lucky date on the most fortuitous Saturday that happened to most fortuitously fit in best with our schedules. November 26: sounds lucky to you, right?

Next step, the invitations. As with everything else in Hanoi, wedding invitations are all sold on the one street - Hàng Gà - in the Old Quarter. In a similar vein to choosing a wedding dress most like a Long Island iced tea, we wanted to find the invitation that had the most stuff on it, therefore offering the best value for money. 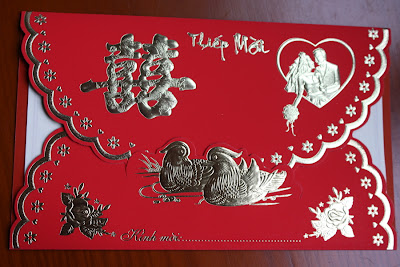 Check out the ROI on that sucker. These invites, with printing inside included, cost 15,000 VND (72c) each. That's 36 cents per duck. Put that in your business case and smoke it.

Then we bought the other most important things: the heart-shaped moneybox, and the glitter cannons: 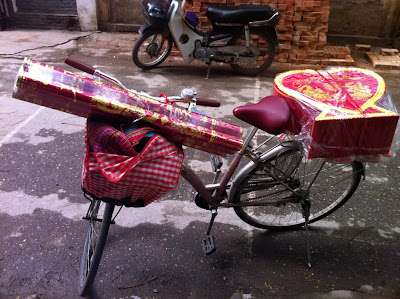 Did I kind of want to get into a traffic accident just for the resultant glitter explosion? I would be lying if I said no.

We were then presented with a list of wedding elements from which we could pick and choose. It became apparent to me that the organisers of that first wedding we'd been to had waved their hands at that list and said "We'll take the lot". 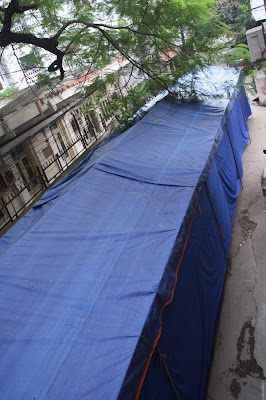 If you remember the post on What I See From Our Window, you'll recognise its placement: 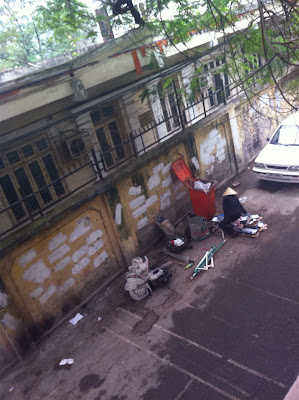 Damn straight. That bin has a special place in our hearts, and we wouldn't want our wedding anywhere else than right there.

And if you remember the post on the cockfighting festival that happens on our street, you'll recognise this view from our other window: 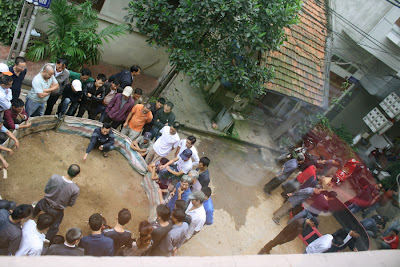 It just so happened that the local pagoda's bi-annual cockfighting tournament was also on November 26. And that, my friends, is why you should go to a fortune teller to choose your wedding date. Because if you don't, they'll use their magic powers on you in the way you least expect.

Cockfighting wasn't one of the things we picked from the list of wedding options, but it added a certain je ne sais quoi to the day. And it made those hipsters who have weddings in rustic barns, sitting on bales of straw, look like total pussies. Bet those bales of straw aren't covered in chicken blood. Nope, didn't think so.

For some reason, the tent was constructed the night before the wedding and we had to pay Dung, the security guy from Simon and Sarah's old building, to guard it, and the balloon arch, all night. The sound of balloons spontaneously popping intermittently throughout the entire night will forever remind me - and no doubt Dung - of the precious joy of marriage. We also had to pay the security guard from the cockfighting festival to stop punters weeing on our tent. You really have to watch out for those hidden costs when it comes to weddings. I immediately added "wee-prevention guy" to the budget for our Australian wedding.


Back to the balloon arch, which was the next thing we chose from the wedding inventory. No matter where your wedding reception is being held in Vietnam, the balloon arch is compulsory. 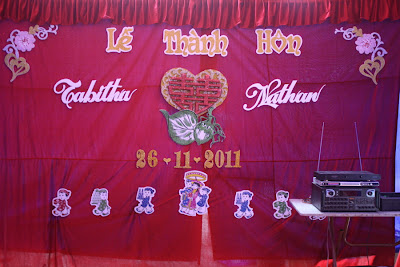 We actually got to choose that backdrop design from a number of options. It was the melon that won us over.

You'll see there the stereo system, which we needed to have because extremely loud nineties techno is, in all seriousness, the traditional soundtrack to wedding receptions in Vietnam. I don't know why this is, but it is. Who doesn't love a bit of 2 Unlimited at 10:30am?

Obviously the champagne pyramid was also a must-have for us: 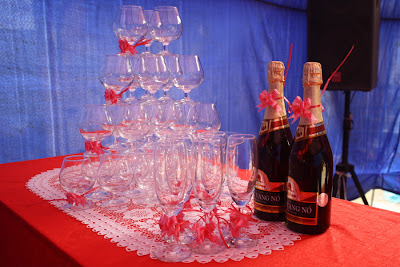 There is actually a whole separate guy just in charge of the champagne pyramid. He arrived direct from another wedding where he'd been working his champagne pyramid magic. We got to keep his dry ice in our freezer, which was actually pretty exciting.

The caterers then arrived: 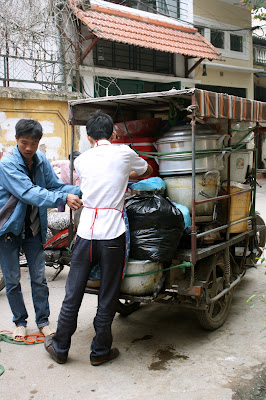 And somehow prepared food for 150 people in our laundry, which was amazing. 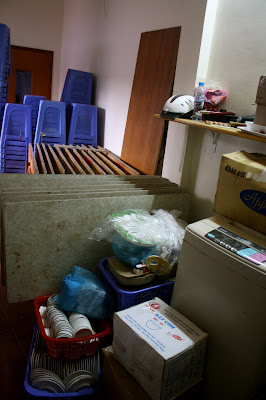 Then they crammed the tent: 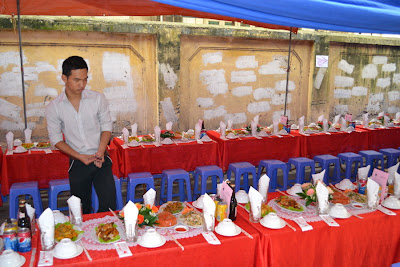 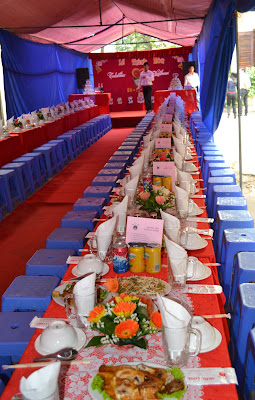 Does that not look awesome?

You'll see here the sign which was specially stuck up for the cockfighting festival: 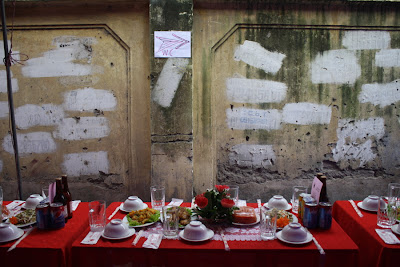 NO WEEING IN OUR TENT.

Then the beer arrived: 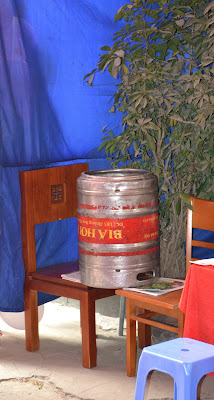 Yay for our chairs!

Then everyone arrived, including us: 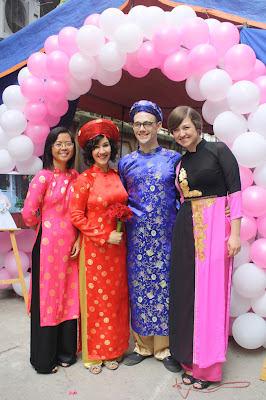 That is Ashton and Huong, who were our awesome MCs for the day. Huong also gave us critical input into how the event should be run. She said we needed a representative from our families to give a toast, but we explained this wouldn't be possible:

And so he did. In Vietnamese, pretty much outclassing our parents. Nathan's boss Richard and colleague Ms Ha also gave speeches, which were suitably embarrassing to Nathan, and therefore extremely enjoyable for me.

Then we cut the cake! 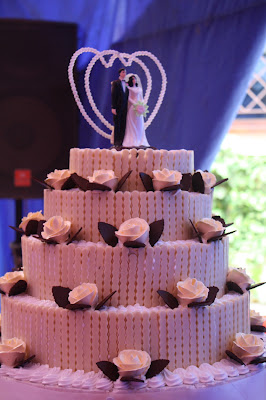 Which is easier said than done, because as you'll see from this "after" photo: 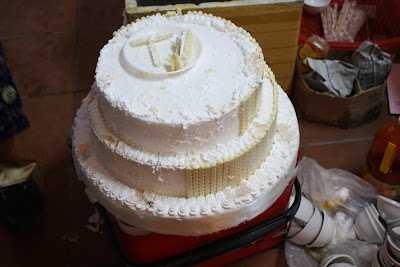 ...the cake is actually mostly polystyrene.

And then, the champagne pyramid with simultaneous glitter bombs! 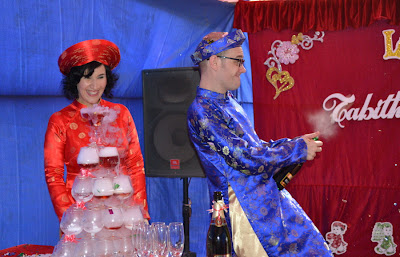 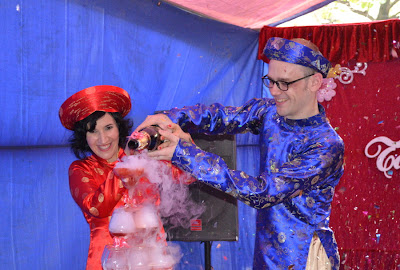 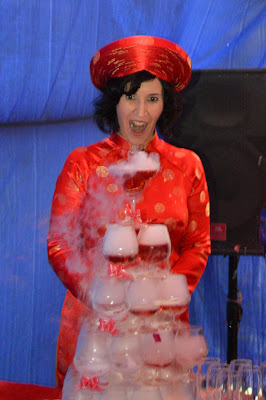 And then eating and drinking! 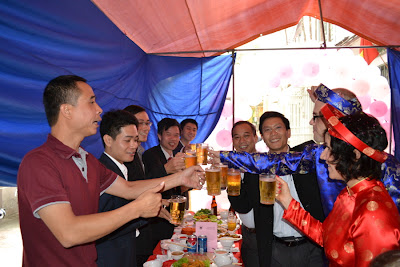 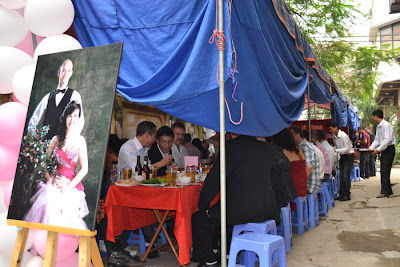 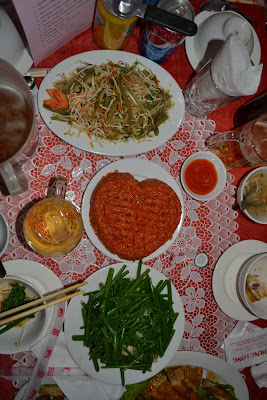 And then it was all over! 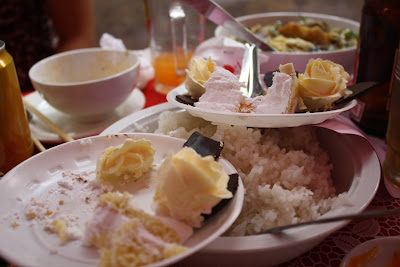 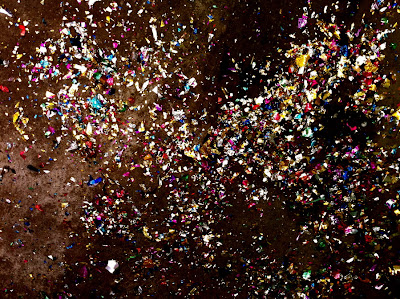 The next day, the only evidence that it even happened at all, was this: 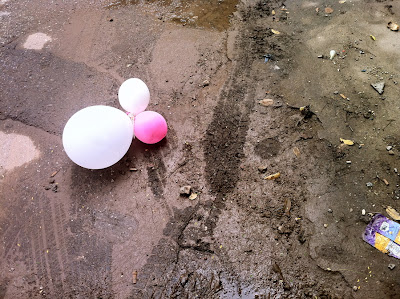 An unfortunate balloon cock and balls.

One of the many reasons that a Vietnamese wedding reception is better than a typical Australian one in my book is this intensity. Every year when I'm watching the New Year's Eve fireworks, I can't help but think how much better it would be if they just let them all off at once. A Vietnamese wedding reception does just that. It's exciting, it's loud, it's colourful, it's frenetic. At no point do you think, "Geez, this is really dragging on a bit". It's also a neighbourhood event that centres around your home and involves the community, as any event with an enormous tent which blocks the entire street tends to. Our neighbours were stopping us to say, simply, "Happy!" for days afterwards.

Many of our Vietnamese guests commented that our wedding party was "old style", as receptions are increasingly held in large function centres or restaurants. I guess our preference for the older, street style is just another example of the Stuff White People Like phenomenon of Westerners looking backwards (barns, anyone?) while the Vietnamese look ever onwards and upwards. To me, there's real spirit in having everyone in such close confines, and all mustered right outside your very house. I would do the exact same thing for our Australian wedding if we could, but the council permits alone just don't bear thinking about.

The novelty of a couple of Tays hosting a traditional Vietnamese event did not pass unnoticed. I was interviewed about it for VTC on their English-language show "Sharing Vietnam", and the lovely Giap did a piece about it, also for VTC, which in three minutes conveys the ambiance of the day much better than all these words:


Thank you to everyone who came, and who helped with organising, and also James and Monica for most of the photos in this post. And special thanks to Tamara and Mags for hosting the after-party. We called in so many favours to make this happen that we'll have to stay in Vietnam another two years to pay them back.

Looking out our window today, you'd never think this was the site of one of the most fun days of our life: 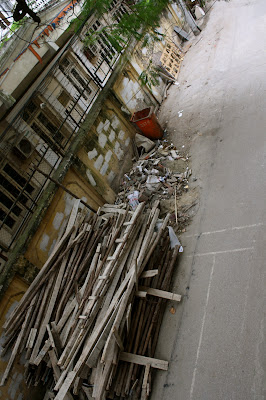 Now all that's left is, as the Vietnamese say, one hundred years of happiness. 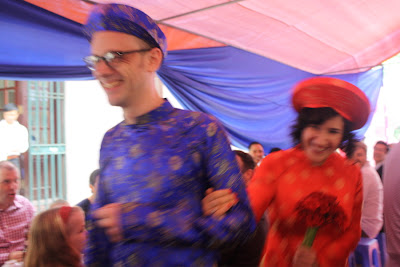 Email ThisBlogThis!Share to TwitterShare to FacebookShare to Pinterest
Labels: He liked it so he he put a ring on it, neighbourhood, wedding, wonderfulness