You can't always get what you want

Hanoi is currently in the grips of a pre-Tet consumer frenzy. You’d think that since there’s no Christmas-like gift-giving at Tet there wouldn’t be so much stuff to buy, but actually there’s even more.

Because every nook, cranny and underpass of the city is already being used to its maximum capacity for selling stuff, all this extra stuff that needs to be sold is just absorbed into the pre-existing spaces.

This is our local coffee shop, which is inexplicably called Jackson, and inexplicably features a toucan mascot: 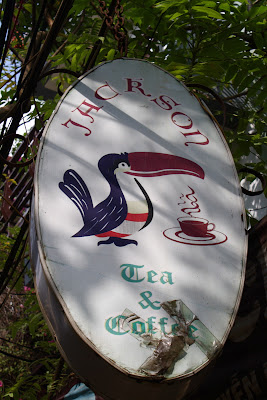 While usually only selling coffee (or should I say "coffe"), it has temporarily diversified and is now offering pot plants: 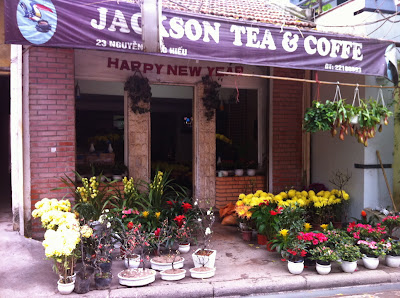 Funnily enough, that “Happy New Year” sign is up all year round. This just happens to be the one of time of year when it actually comes good. Happy New Year to you too, Jackson!

This is the printing shop where we got the invitations and decorations for our Australian wedding made: 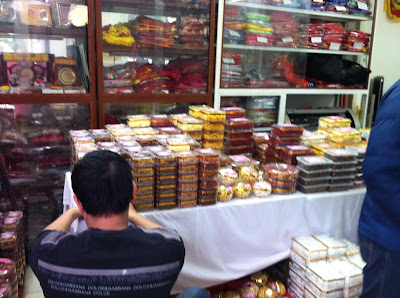 As you can see, it is now mostly selling preserved fruits. That guy packaging the preserved fruits is not just an ace preserved-fruit-packager, he also has pimping CorelDRAW skills. That’s Gen Y for you.

And this is our dear old Trúc Bạch lake: 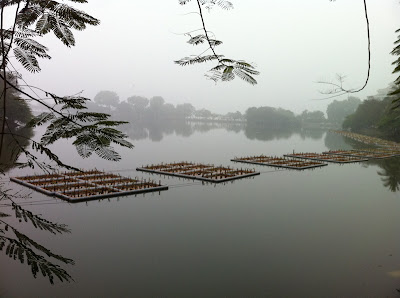 For the rest of the year it’s just a sewer, but for now it’s a sewer with flowers growing in it. I asked Nathan if he wanted me to buy him a plant grown in his own poo, but he declined.

You’ll be pleased to know Trúc Bạch is getting into the Tet spirit in other ways: 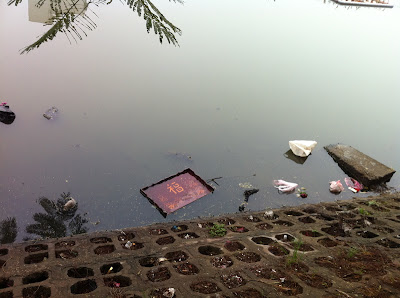 That’s some altar offerings and a dead rat. Happy New Year to you too, little bloated chuột!

At any time of year, buying things in Hanoi can be a challenge. Every single thing that exists in the world exists in Hanoi – somewhere. In fact, they’re probably made here.

The challenge is in knowing where to find what you’re looking for. This is complicated by the travelling vendors, who might be tauntingly moving your sought-after item around town, always just out of your reach, as you’re hunting around looking for it.

And an infuriating thing happens often with supply and demand here, where as soon as you want something, it will completely disappear, even if it was previously ubiquitous.

For example, once we were cooking canh chua for dinner and needed pineapple. Now, anyone who’s been to Hanoi would know that Hanoi is usually awash with pineapple. In fact, “Hà Nội” in Vietnamese actually means “City of Plentiful Pineapple” (not really). But as soon as we actually needed the damn fruit, it was as if the street vendors had all been called out of town on a pineapple-selling convention. 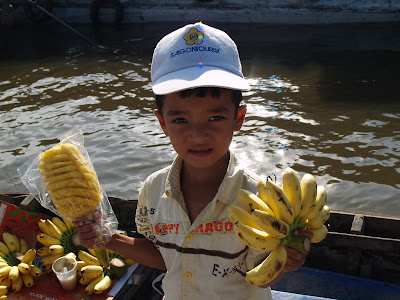 Where's this guy when you need him, eh?

After giving up myself, I made Nathan cycle aimlessly around the city looking for the spiky suckers. It took him over an hour and he practically had to cross into China to find one. But find one he did, because he knows if he’d come back empty-handed, I would have beat him.

Now I know to aim low, and try not to yearn for anything too specific. I head out looking for “fruit” and if I come back with morning glory and some fried peanuts, I chalk it up as a success. Because it’s at least “food”.

So when Nathan dreamed up a Halloween costume that looked like this: 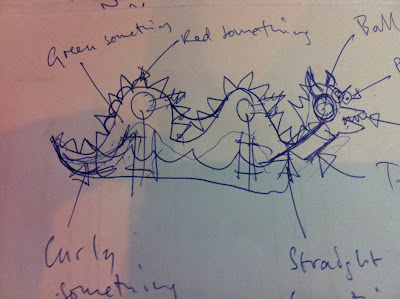 But one thing I do love about Nathan is that he dares to dream. So I said I would try. But that I would spend no more than one day looking for the ingredients for his vision and if they didn’t turn up – which they inevitably wouldn’t – he would have to design a new costume. Preferably one featuring morning glory and fried peanuts.

I randomly chose a shop to begin my search the next day. The conversation there went like this:

And with that, she reached under the counter and produced them, as if she’d been expecting me.

And so Nathan’s vision became reality: 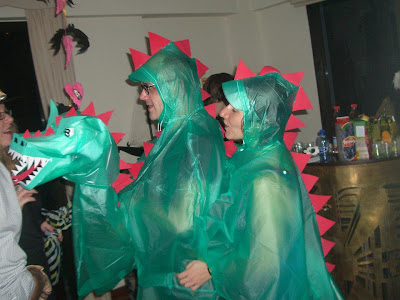 And I became sweaty and delirious from the combination of glue gun and plastic, but still none-the-wiser on how this place works. Which is just the way I like it.

Happy Year of the Dragon! Now go out and buy some stuff.
Posted by Tabitha at 11:48