In Vietnam, I've been thrown in with a whole heap of folk from walks of life that aren't my... usual... walk. Whatever, they're awesome.

For example, I got to meet Charmagne, who was resident jazz singer at the Metropole for three months. I don't know what excited me more: the fact that she got to live in the Metropole and have French onion soup delivered to her room for breakfast every day, or simply knowing someone with a sentence in their bio that reads "She performed at Sean "P Diddy" Combs' 3rd Annual All-Star Festival in Cancun".

I also got to meet Falk, who has the best job title in the world: Bear Manager. BEAR. MANAGER. 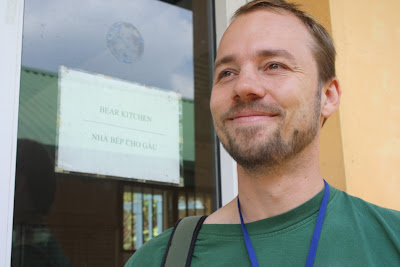 Falk manages bears at the Animals Asia Bear Rescue Centre in Tam Dao National Park, which we finally got to visit in December to celebrate Nathan's "bearthday" (see what I did there?). And it turns out that Falk may not have just the best job title in the world, but the best job too.

As you would imagine, bears at the Rescue Centre have been rescued, coming from the most horrific conditions on bear bile farms, where they are kept in tiny "crush" cages and the bile pumped out of their gall bladder for use in traditional medicine.

So when one of these bears is freed at the Rescue Centre, how do you reckon they feel? 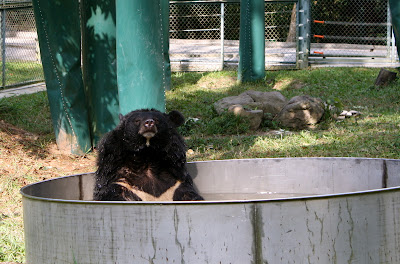 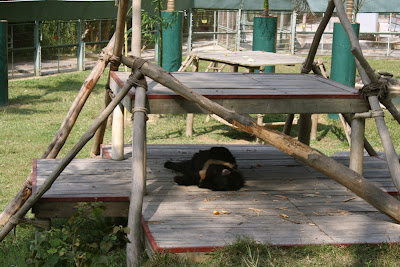 It really does seem like they're the happiest bears alive. Oh, except for this bear: 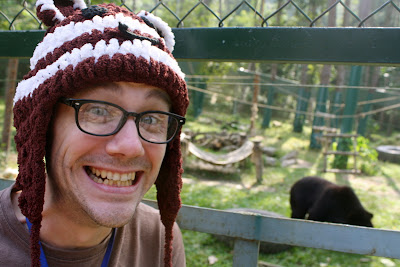 Thanks to the Bear Manager and the other centre staff, this is bear paradise.

Their food is all prepared in the Bear Kitchen, which looks like this: 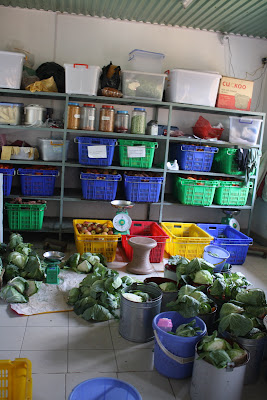 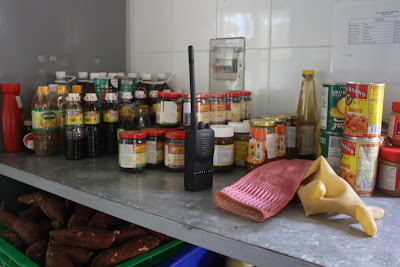 Bears like cabbage, sure, but can you see what's on that shelf there? Baked beans, sweet corn, jam, Nutella, coconut cream, peanut butter... Turns out that if a bear drops around to our house for dinner, we are already well prepared.

These treats are part of a frighteningly well-organised programme (did I mention Falk is German?) to keep the bears stimulated: 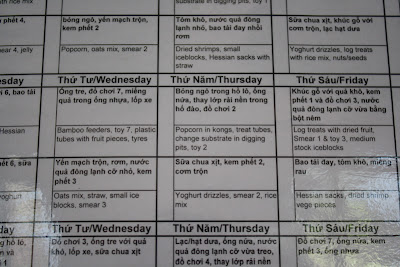 They even get special bear popsicles: 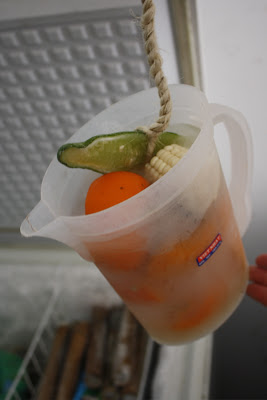 Their food is hidden about their enclosure for them to sniff out like a treasure hunt, which is just as much fun to watch as it sounds: 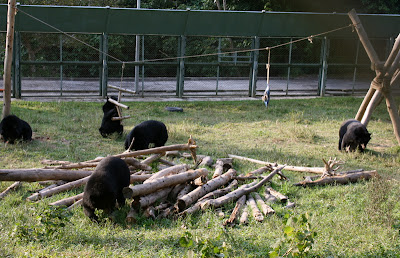 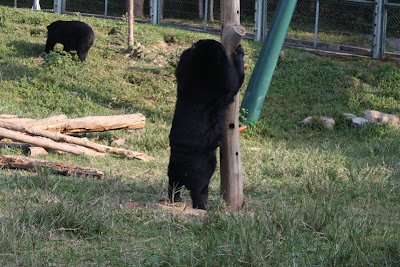 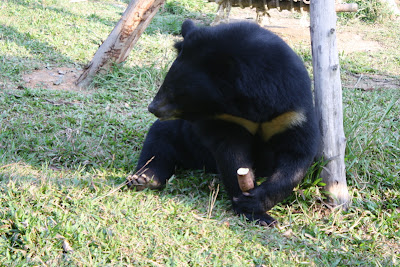 They then get to spend the rest of their time loping around with their friends and playing on their bear playground: 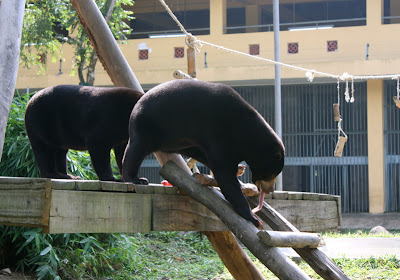 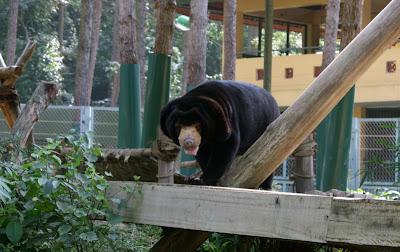 Long gone are their days of imprisonment and torture. Now their only worries are like when the tyre-swing breaks under their enormous, furry, Nutella-loving weight: 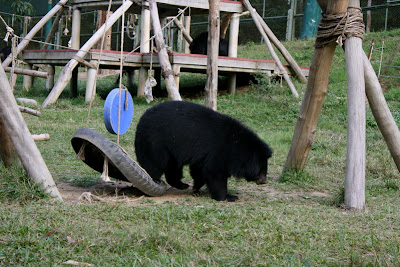 The bears are so teddy bear-like and bumbling and adorable it's easy to forget that they're actually, you know, ferocious bears, which is why they have this: 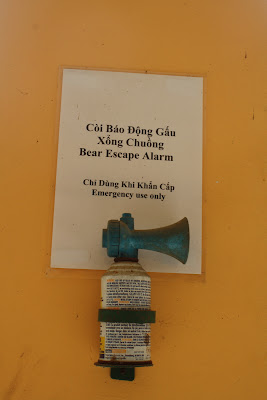 Oh, to have a workplace with a Bear Escape Alarm!

I wanted a bear to escape so it could give me a big old cuddle, but Bear Emergencies are a serious business. Check this out: 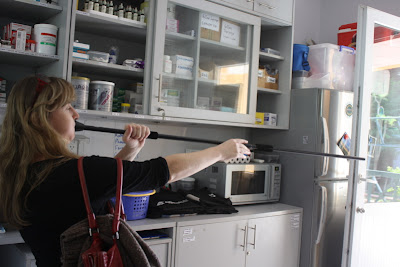 Yes, that is a blow-gun. A BLOW-GUN. And that is Falk's wife, wildlife vet Leanne, demonstrating how to use it. Did I mention that I've met some awesome people here?

And what do you use to distract a bear while you're aiming your blow-dart? Well, what do you think: 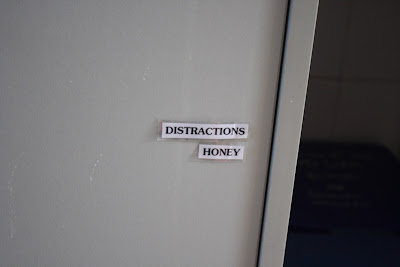 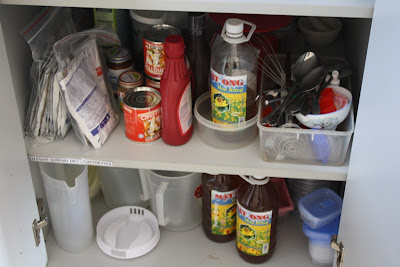 How can you look at that shelf of distracting honey and think of them as anything other than big ol' fluffy teddy bears? It would be like shooting a tranquilizer dart into Winnie the Pooh himself.

At the end of our visit, two truckloads of new bears arrived, freshly rescued from a bear bile farm: 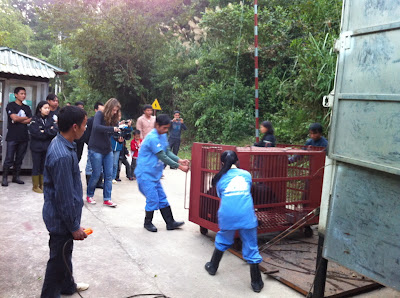 They looked worse for wear, stressed and terrified. It was a sobering reminder that being a Bear Manager isn't all bear popsicles and tyre swings. It's a job that comes out of a really awful, and completely unnecessary, industry of animal cruelty. And the rescued bears actually aren't the happiest bears in the world; those are the ones in the wild. Although this guy comes a close second: 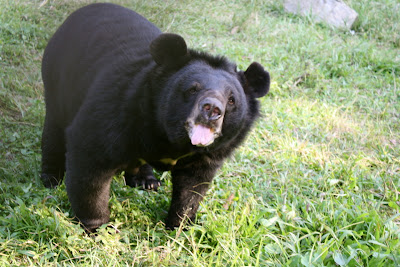 If you'd like to visit the bears at the Rescue Centre, it's best to contact the Animals Asia Foundation in Hanoi to arrange a time for a free (!!) guided tour, by emailing Ms Thuy, their Communications Officer. Try to visit at feeding time for maximum bear awesomeness.

Unlike the wildlife rescue centres in Cuc Phuong National Park, it's easy to get to Tam Dao National Park and back in a day. You can organise a taxi, or catch the bus from My Dinh to Vinh Yen, then change for a bus to Tam Dao town or grab a xe om the rest of the way. The turn-off is at KM 13 near Ho Son, and then you follow that road all the way to the centre, which is in the foothills of the National Park.

Aside from the bears, the centre is also in a lovely little spot with a great view. Bring along some sandwiches and you can even have a picnic on their little patch of lawn.

You can donate to Animals Asia or sponsor a bear here, because bear paradise doesn't come cheap.

Email ThisBlogThis!Share to TwitterShare to FacebookShare to Pinterest
Labels: Is it too late to change careers?