Yesterday it was International Women's Day, the theme of which, according to the UN, is "Empower Women - Ending Hunger and Poverty".

In Vietnam, the theme of International Women's Day is "Have I Somehow Entered A Wormhole Which Has Transported Me Back To Valentine's Day?" 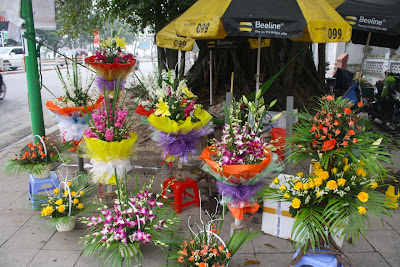 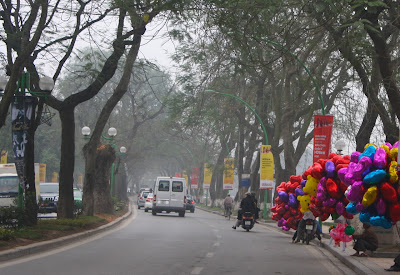 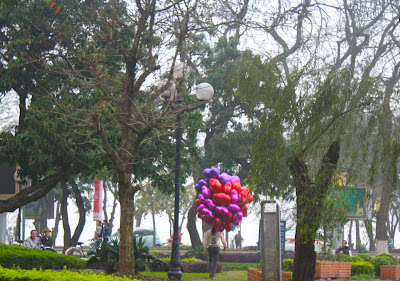 While women in many other cities use International Women's Day to rally together for equality, here in Hanoi women receive over-priced bouquets and heart-shaped balloons, and get taken out to lunch by their male colleagues.

There is no bigger day for flower sales in Hanoi than International Women's Day. The elaborate bouquets, always bolstered with a lot of size-enhancing packaging, are toted awkwardly to lunches all around town, often in plastic bags slung from the handlebars of motorbikes.

Yesterday I cycled behind a bike carrying several bouquets in such a manner, their aluminium foil-wrapped handles dragging along the road creating two sprays of spectacular sparks. It was like a scene from The Fast And The Florist. It seems that no matter what the holiday, Vietnam will always find a way to make it a public safety risk.

On International Women's Day, a number of observations are compulsory:


All these points are valid, the last one in particular. I'm a holiday party-pooper from way back (Melbourne Cup Day? Horse torture! Australia Day? Invented as a money-making scheme by the pavlova industry!), so I'm expert in harping on about how International Women's Day in Vietnam is a load of tosh and flowers to distract from the real issues women face here.

Issues such as one in three Vietnamese women reporting they've suffered physical or sexual abuse from their husbands, or the traditions of inequality that have led to 110 boys being born for every 100 girls, or the 3,000 reported victims of human trafficking between 2004 and 2009, or the fact that 70-80 percent of officials responded in one survey that domestic violence is "sometimes necessary".

Vietnamese women are amazing and inspiring, and face social pressures which I can barely conceive of. This post by Nguyen Thi Hoang Yen on the Oxfam blog gives you an idea of the difficulties that even educated, successful (and amazing and inspiring) Vietnamese women face day-to-day. For them, gender equality is about women being able to "do what they want to do, say what they want to say, or even be able to have better sleep". Funnily enough, flowers and a complimentary glass of champagne with dinner didn't make that list.

I spent much of my International Women's Day working at home (WHERE I BELONG), with the sound of raucous lunchtime revellers echoing across the lake. The ubiquitous, male, beer-sculling cry of "Một hai ba, YO!" carried on long into the afternoon, leaving me wondering if the women had all returned to the office so their male colleagues could celebrate International Women's Day in peace.

Then there was a knock on our door, interrupting my dangerously emancipated thoughts. It was our jolly landlord, Mr Chien, with a bunch of roses and a card: 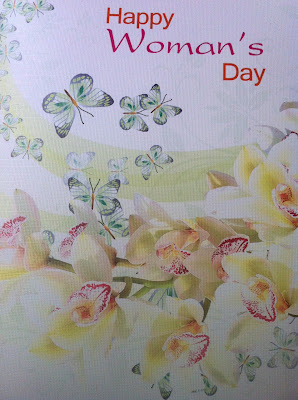 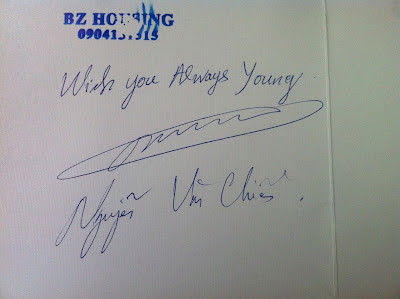 I could say I was struck by this unobtainable wish, and how it reflects the pressures placed on women in Vietnam to maintain impossible standards. But I wasn't. I was simply delighted, and charmed, and actually said "For me?! Oh you shouldn't have!" like a veritable southern belle.

It was a perfect example of the rose-scented smokescreen of International Women's Day. But as I was arranging my flowers in a vase, I realised that Vietnamese women know what time it is. Gender equality is a long way off, and accepting the flowers won't make it any longer. It's not like they have to choose between gender rights and flowers. So next year, wherever I may be for International Women's Day, I won't be shutting up about women's rights, but I will be buying flowers for all the amazing and inspiring women I know. Because getting flowers is always nice, and God knows, they've earned it.

Email ThisBlogThis!Share to TwitterShare to FacebookShare to Pinterest
Labels: I am international woman hear me roar